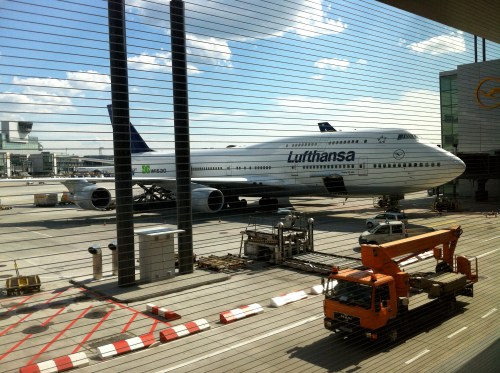 …It’s not for the faint hearted.

Two weeks ago we packed our bags and travelled to Germany from our home here in Ireland. On paper it was simple. I was still slightly freaking out before leaving (actually, really, completely freaking so much that I made myself sick and had to go to bed for a day) but once I got over that little moment, all was fine.

Many, many lists later, our bags were waiting for us, sandwiches were made and packed. In all, it was so much easier than I had imagined, even verging on the enjoyable at times!

We flew with Lufthanza: and I heartily recommend, if travelling with small children, that you would consider spending extra money on the flights. Lufthanza were just excellent: attentive, thorough and very pleasant to the children (and in fairness to them, I have no doubt their heart sank when they saw a line of smallies trudging into the plane) when we boarded, something small was always handed out to them: soft toys, puzzles, a little bag of pretzels on one of the short flights! Food was served on the flight (this was my only negative, it was, appalling; but we had a large rucksack of sandwiches and other eats each time so we were fine) and drinks, they all had two beverages of choice (the whole discussion about “why don’t we just stick to water and fruit juice for the flight?” was forgotten about when a smiling flight attendant asked what they would like, indicating a trolley of fizzy drinks as well as the fruit and water options and my frown-y faces were ignored from across the aisle) (but no one became too giddy thanks to a glass of fizzy sugar drink thrown back at speed) 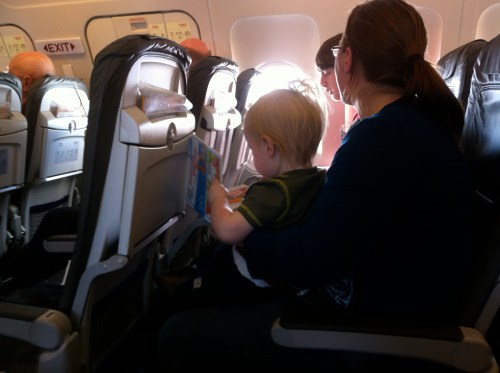 We flew from Dublin to Frankfurt, then got a connecting flight from there to Nuremberg. Thanks to flying with Lufthanza, our bags were forwarded on, and each time we arrived our stroller was waiting for us as we came off the plane. Frankfurt (largest airport in Europe) was so huge and so frantic, we were terrified we wouldn’t make our connecting flight, wouldn’t find our boarding gate, and in the middle of it all, lose a child or two. Despite to having a word of German (well, only a few- and I found my comprehension was far better than I had thought) we made it to our gate (with only one minor- funny- incident: our boarding passes had the gate number on them, so with a lot of hurried running through the airport trying to find the signs, the terminal, the gate, we were walking- fast- along a corridor. A porter in one of those airport transport buggies offered to bring us to our destination to which we gratefully accepted. On we hopped and he spent several minutes belting us in, checking we were safely in, should he get a belt for the baby etc (all the while I was silently screaming at him: “feck the belts!! Just get us to the gate!”) He asked what gate we were going to and I told him. He stared at me unimpressed, then slowly turned and silently pointed at the gate sign about ten feet away: our destination!! We all fell around the place laughing (known for our inappropriate laughing at times like these) but he regained some of his humour at us in hysterics and decided to bring us for a little loop of the corridor since we were now ready to go. When we disembarked, settled down, then Fergal went off to get some water. Minutes later he was back in a panic, he spotted that a Nuremberg flight had left, spoke to attendant at the gate who checked our tickets, and she realised the wrong gate for our flight was printed on them. Eeek!! In speed, we packed up again, looked for our “friendly” transport man who had scarpered, and started into the long (long) walk to our gate (the right one). Eventually we arrived after a mammoth journey, we all used the loos, and I bought hugely overpriced water while the children played at one of the play areas.

At this juncture let me say that the play areas were the highlight of our travelling time (apart from the fizzy drinks) They were spacious, clean, bright and had an enormous airplane play model for the children to climb, slide and play in. 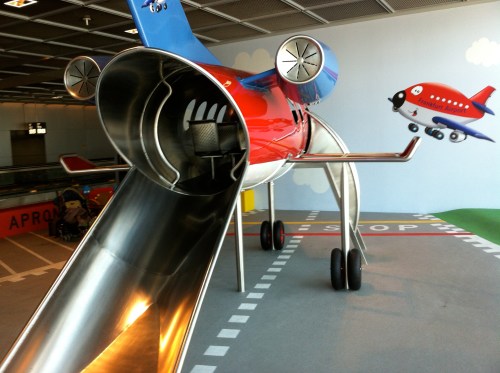 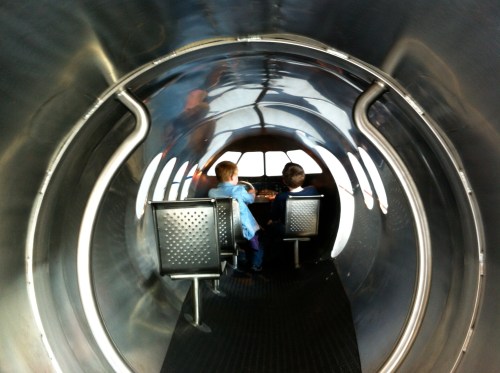 When it was time to board, all were calm and content. And on we flew to Nuremberg.

Our time in Germany is documented here, here, and here, and our return trip was pretty much similar to the first, except we flew through Munich this time, which is a smaller airport. We found Munich to be just lovely, the airport attendants were friendly and very helpful. The food and water were eye wateringly expensive. 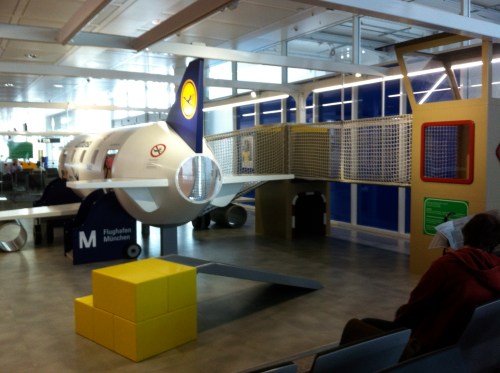 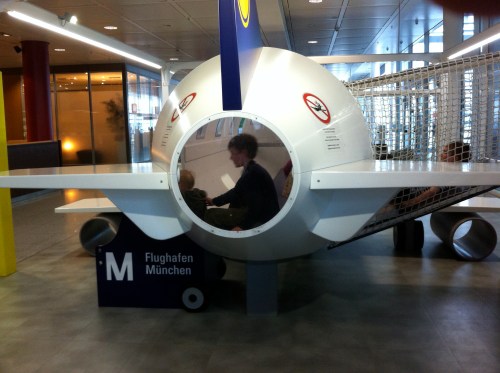 We had a long four hour wait for our connecting flight to Dublin, and again spent most of this time at the fantastic play place. James was contrary in the extreme by the time we boarded (I was keeping him awake so he would sleep on the plane, hoping it wouldn’t backfire on me in that he would get over-tired) and the man at the boarding desk allowed us through first ((thank you whoever you are)) We had to get a shuttle bus out to the plane, but had seats and then boarded fairly quickly. James was asleep before we took off!

There and back, Fergal and I had packed bags specifically to entertain and feed the masses (our children) Before we left I gave each of the children a book I bought for them (for example, beautiful farmyard tales for James and a DressUp Princess sticker book, both Usborne) I had also bought a little notebook and a pencil case with stationery for each of them. I had several Lego mini figures, and other little teeny things in separate bags that would take time to open and play with.

Grace spent most of the time doing her sticker Princess book, James was happy to be read to or to play the iPad (when he was awake) The boys read, looked out the window and played their Nintendo. Each of them had a carry on bag, so they had all their essentials: Nintendos, iPods, cameras, books with them. It made for interesting unpacking when it came to security checks, but kept everyone amused for all the waits (remember to charge them up before you go!!)

I packed nappies, baby wipes, anti bacterial wipes, tissues, homeopathic remedies (Arnica saved us a couple of times when James fell off the climbing airplane-frame) a 100ml bottle of antibacterial gel (this had to go into an airport ziplock bag: you can carry on 100mls or less of liquid or gel) and random crazy bits to amuse; Fergal packed seven bags of sandwiches (!!) crisps, Kinder bars (as bribery) and lollipops (for ascent and descent) The babywipes were great, we regularly wiped smallies down, and put a bit of gel on their hands. I wiped down tables with the antibacterial wipes before eating. I don’t normally ever use anything like that, but it gave me peace of mind that I was saving us from some rampant viral virus nasty airport bug (*over active imagination*!!)

In all, the key is, I think, to be super organised (I wouldn’t usually put myself in that bracket) (many lists, and lists of lists, helped) We are looking forward to our next (European) flight; and regularly marvel at people we know who have taken long haul flights with children: Brave Souls:- we salute you.

((This is not a sponsored post, all these opinions are my own: but should anyone feel like encouraging me further, I’d happily do a sponsored post in exchange, for say, flights or a holiday 😀 ))