This post is peppered with totally irrelevant photos so you don’t get bored. It is also not a Brief post; I don’t do those, being a fan of the long sentence and all that. 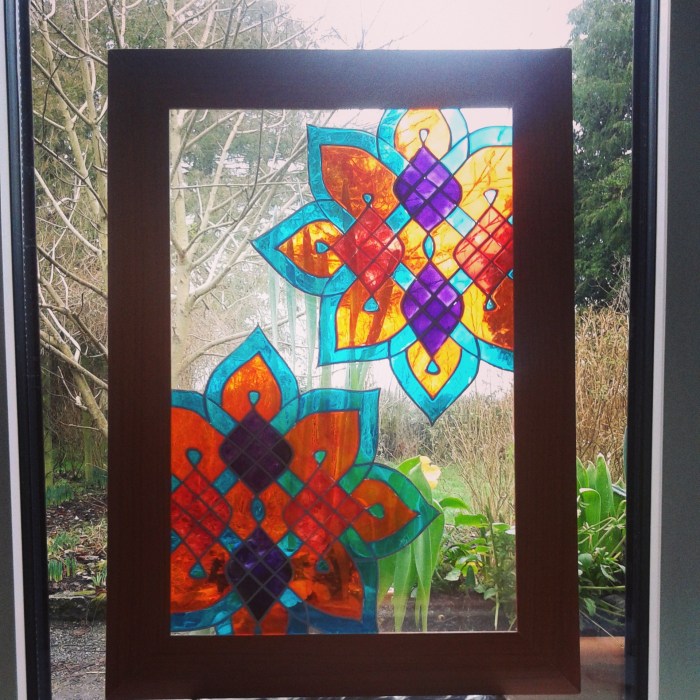 When he woke howling from a bad dream (never does things by halves), waking the baby, I knew in an instant that we would be getting UP (in the middle of the night, weep), I knew I was fighting a losing battle, whilst silently cursing myself for the prophetic conversation I had had the evening before in the supermarket: 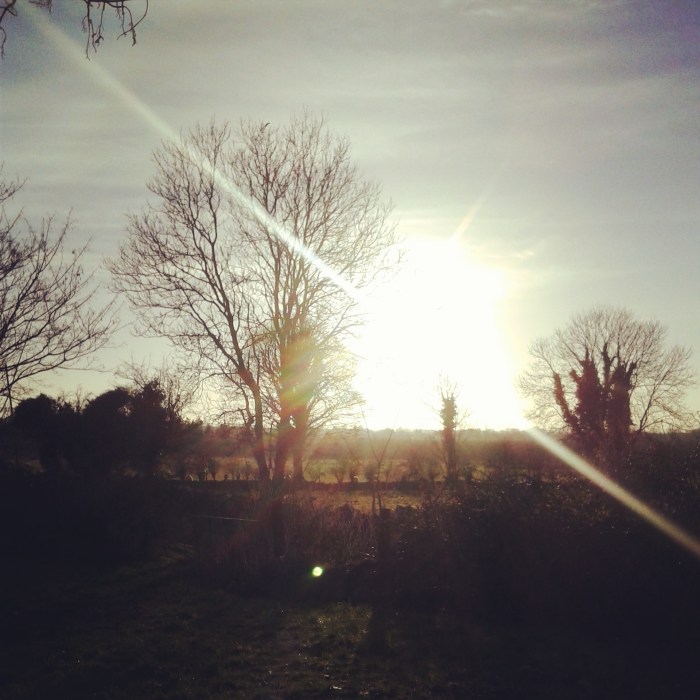 There I was, all zen and organised, having done the shop for the week; walked aisle by aisle mentally processing what we had, what we needed, what we would be eating for breakfast, lunch and dinner for the next week or so; and now was packing my groceries in my usual anal-retentative-grocery-packing way: an OCD tic I indulge in when I go shopping by myself, no small- or big- people to talk at me, distract me, shop for me or pack for me (my greatest trauma when shopping, is that someone will pack my groceries for me. Our supermarkets often do bag packing as a means to raise money for a particular cause; I, with pounding heart, fumbling fingers and sweaty brow tend to shove coins, euro, anything at them so they will BACK OFF FROM MY GROCERY PACKING)

I was engaging in some small talk with the woman behind the counter, talking of children and working (I am greatly interested in the minutiae of other people’s lives; I am forever hearing about their children and what hours they work and what they eat for dinner and ongoing medical complaints (the last one is always proffered without the slightest provocation: “…and we had chicken korma on the Thursday -I always use Jamie’s recipe, and a jar- and I didn’t enjoy a BIT of it, what with t’piles acting up…”) ) and she was saying how she loved starting work early, getting a head-start on the day. “Oh yes”, says I, “I love getting up early, I get so much done before the day starts” while all the time shrieking silently: WHO IS THIS, SPEAKING SUCH INSANITY?! Knowing that there is never a chance of an early start without at least one, often two or more, prematurely woken, contrary-tired children needing more than usual attention, and the chances of me getting anything done above and beyond the normal stuff I need to do being nigh on impossible.

Who was that speaking?

‘Twas I, with at least four pairs of rose tinted glasses, high on a solo grocery shopping trip, living firmly in the future when small dependent children are much bigger, and are horrified at the thought of crawling out of bed anytime before midday.

That was me, having an out of body experience.

That was not ME, on a wet Monday evening in January 2015. That was insane me. Prophetic me.

Anyway. Back to this morning. Bearing in mind that I was fighting a losing battle, I sucked it up, telling myself gems like “this won’t be forever” “Someday you will get more than two concurrent hours of sleep” etc and Fergal and I sleep-walked to the kitchen and then James and I made scones while Anna swung out of my pyjama leg trying to bite the fabric, while Fergal washed up (we are in the middle of a yet-another-dishwasher-has-broken saga; I tend to drive all electrical appliances haywire so fear I looked at it crookedly one day) before going back to bed for an hour before work. 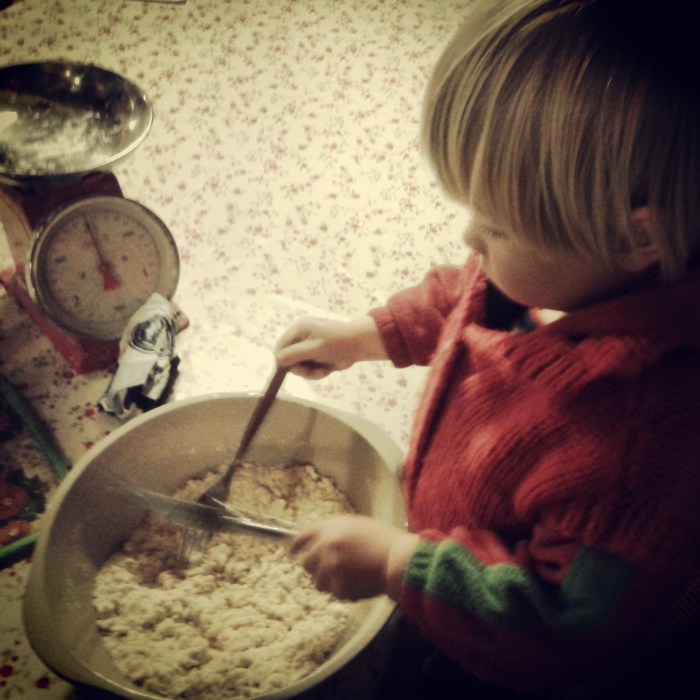 (Making scones at 7am)

Not so bad, I thought, in another hour or so Anna would be ready to go for a nap, and if I had a willing helper, a.k.a. An Older Boy, I could nap for a half hour too. Or even not: sometimes being able to drink a cup of tea without smallest bodies swinging out of you is delightful.

So Fergal went off to work, feeling hungover from exhaustion, and I sat down to nurse the baby.

We got up (knowing I was still fighting a losing battle and quitting while I was ahead, as in, before I lost my head in frustration) and I had the delight of opening the delivery of art materials, a 1.5 metre roll of watercolour paper: the excitement! I took it out of the plastic wrapping tube it was in, chopped off a big piece to masking tape to the floor so the little ones could paint freely and I could feel like a Good Mother doing An Activity, and then proceeded to try put the roll back into the tube so it wouldn’t get damaged. 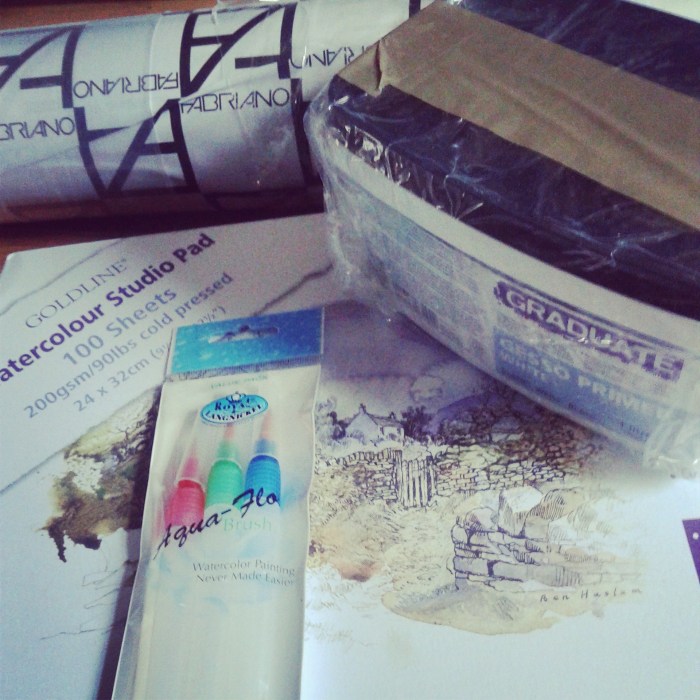 What on earth was I doing? Had a celestial being not spoken- nay, roared- at least three times already today: “FIGHTING A LOSING BATTLE!!!” Yes, it had. But I continued on… unrolling the tight sausage-like casing onto the stiff sausage-like roll of paper that was almost the same height as me. Let me assure you, this not not an image you ever want your children to see. After a long time, (a loooong time), I quit while I was (not quite) ahead, (this is not a pun). And wrapped the naked end in about 5 meters of cling film (I reckon I’m onto something. Watch out, Durex) 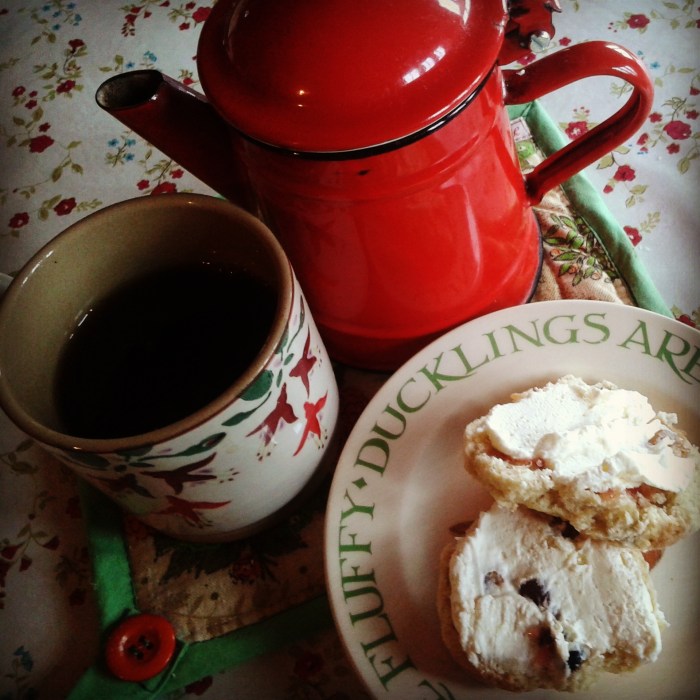 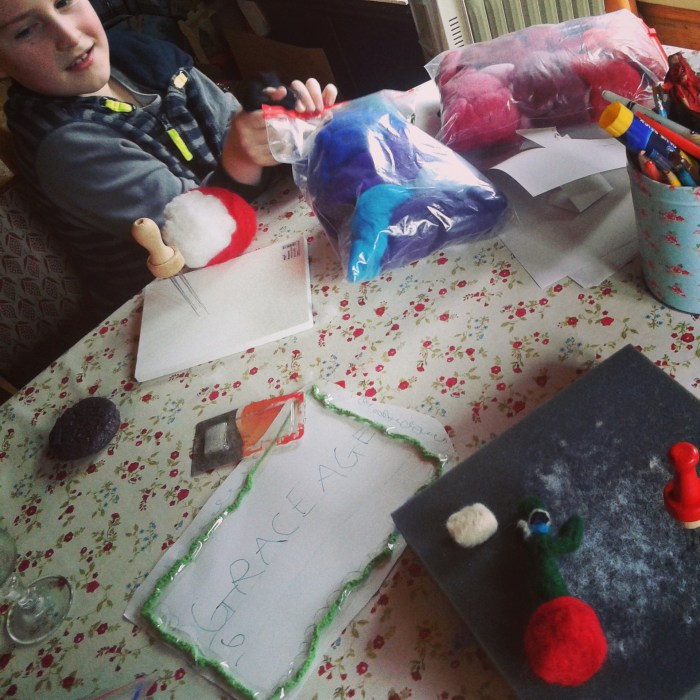 And therein is my day so far. The key message for me today was: when you are fighting a losing battle, quit while you are ahead, being careful for what you wish for. In my case, my wish involves tea and a scone so I think I’m sorted. (In fact, I think this  is going to be a scone fuelled day…)