Our James had a birthday this week. He’s such a boy, but such a baby; a real, cuddly, babyish boy still, always pretending to be BIG and brave but really he’s not at all. Last night before lying down in bed he decided to turn the little night light lamp off. I said “it will be really dark, James” and he said “me like the dark!” And turned it off. There was silence for a couple of seconds. I said, “will I rescue you?” And this teeny, scared voice whispered “yes!”

And so he is three. I was really ill the time of his birth, so I remember the elation mixed with that funny sensation of blurriness that I can’t quite make clear. But he has filled our lives with utterly clear joy since: he has been so sweet, so easy almost every day since. He is a happy, contented boy (when he’s not hungry. When hungry, then, he is the absolute opposite. Think demonic) 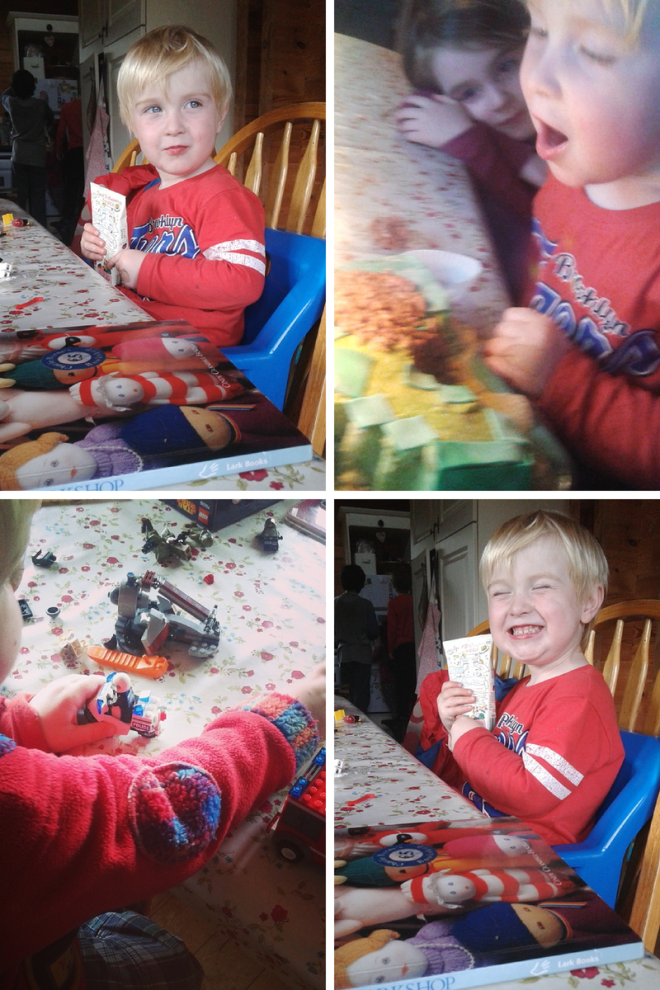 On his birthday morning, as per family tradition we dragged ourselves out of bed early (rather than the usual slooowww ascent into the day) James woke the boys with glee, and we trooped out to the kitchen to open his presents. He opened two Lego mini figures from Grace first. Up he jumped, shouting “Woah! Yego! [lego] Yots and Yots of yego!” Before he ran off in excitement, we showed him the other presents: the first, a plastic rifle (don’t judge 🙂 I have major philosophical issues with guns, but he’s obsessed with “army-guys” and being “the good guy” protecting us from “the bad guys”. I spent many hours freaking out until a friend of mine showed me this. I feel less like a Bad Mother now)

Anyway, he opens this €1.50 piece of rubbishy plastic and screeches with delight! “Woah! Oh Woah! A dun! [gun] Woaaahhhh!!” It was a bit like the little boy in this video, who first gets a chopping board for his birthday, and then thinks a shoe box contains new shoes so he doesn’t have to glue his shoes together anymore. (It doesn’t, it contains a computer tablet) It’s heartbreaking!

James jumps down and shouts to the boys “Yets fight the bad guys! Woaaahhhh!!!” And the boys say, “But do you want to open the rest of your presents, James?” And he is momentarily confused, looking at the presents on the table, saying “for me?!” And he opens the two little boxes of Lego and nearly bursts with excitement: “Yego! Me have yots of yego! Yots and yots!”

Oh, how I love that gorgeous, sunny boy!

I feel I have to admit to the major fail of the day: the cake. (I had even contemplated writing a tutorial IF it turned out well. Haw Haw) James wanted a “yourd” [sword] cake, so after a bit of discussion with Michael we decided on a Minecraft Yourd Cake. (He loves Minecraft, and plays with Michael, being a bit of a menace really, much to Michael’s frustration) Our plan was to make a large Victoria sponge and cut the yourd shape out and then ice it. Simples. 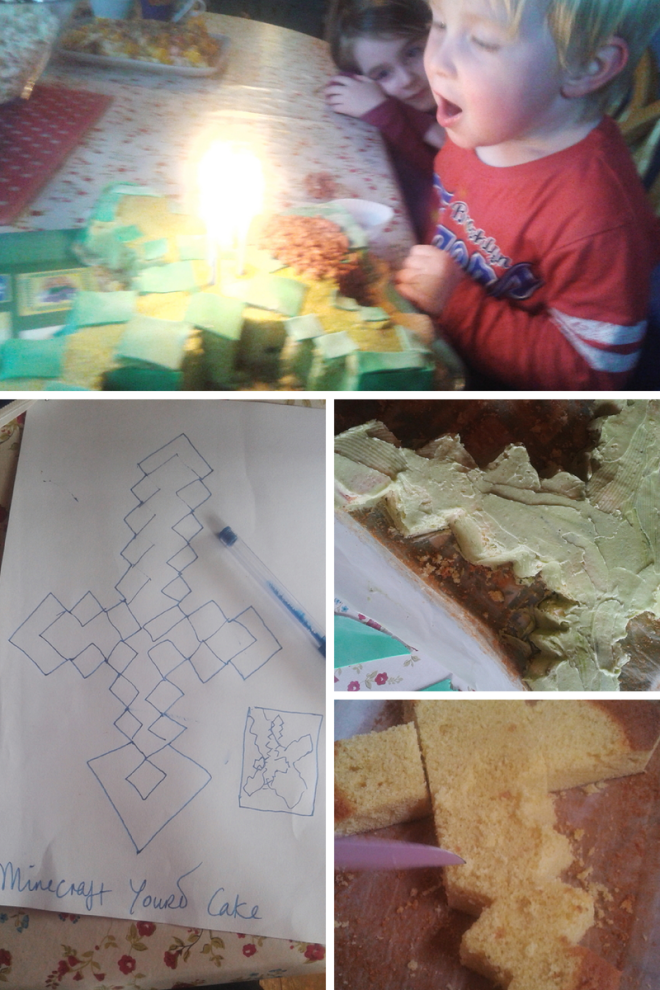 Unfortunately it was all a bit of a disaster, really. It looked like a crazy crucifix. The boys, kind souls they are, tried to assuage my complete sense of fail where this cake was concerned, by telling me that “ah, no, it does look like a sword!”. James took one, horrified, look at the cake and pronounced it “ooo-ey, ooo-ey!” (The snot green colour was a bit off putting, I agree)

But it did it’s job as a candle holder, and after singing happy birthday, he was off again, covered in ice cream (which he licked once and ended up all over his face), chocolate (he ate, at most, half a teeny rice-Krispie bun, yet looked like he had a brown beard) and glitter in his hair (I don’t know where that came from) as happy as a birthday boy could be!