James turned two last week: he continues to be a smiling, golden haired, happy little chap, who is obsessed with tractors, bales and all sorts of farm machinery. I asked Grace what kind of cake she thought I should make him, and she inevitably said: a tractor; then drew out the design: 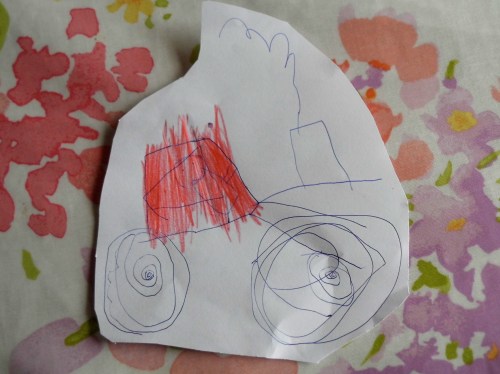 I’ve been having one of those weeks where my brain isn’t quite moving as fast as it should, so I didn’t make the tyres the day before; I really should have: they would have hardened and not squished slightly underneath after a couple of hours. Not that James cared! He was completely delighted with the “tac-tor” and it took a bit of convincing that it was actually a cake. Michael, Liam and Grace made extra little fondant animals and we cut out “bales” from some left over cake with a cookie cutter (even the golden colour was perfect) 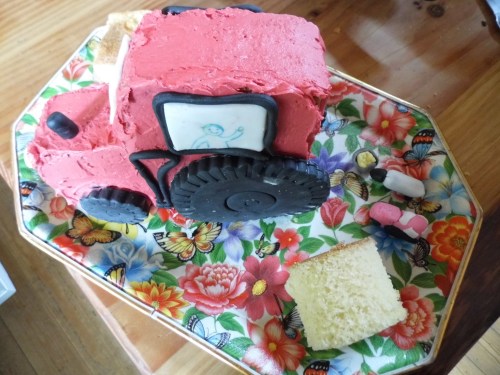 This was a very simple cake… Not my greatest creation ever! But very effective and quick for a tractor-mad two year old. 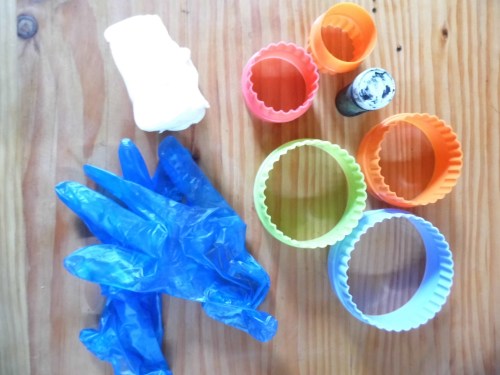 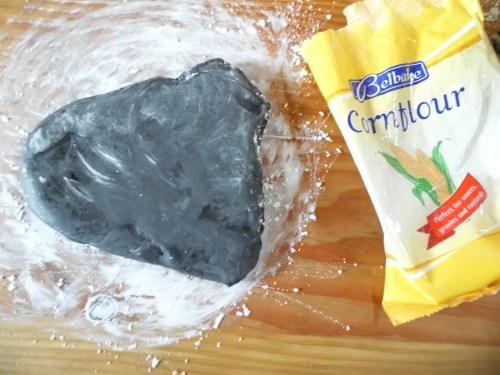 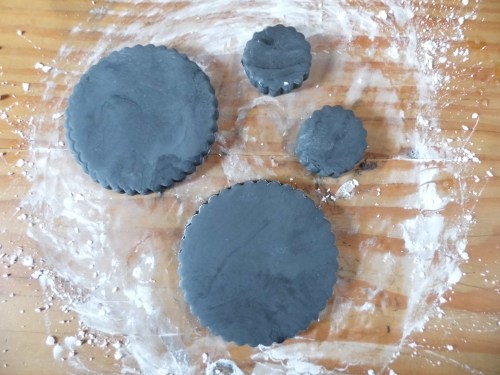 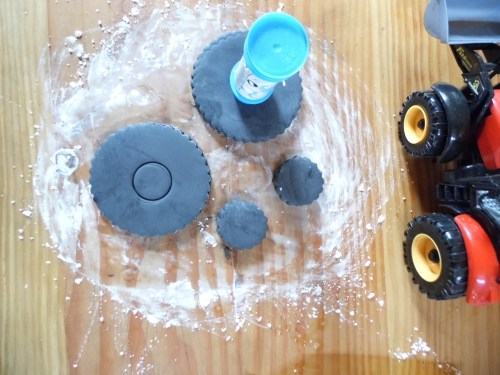 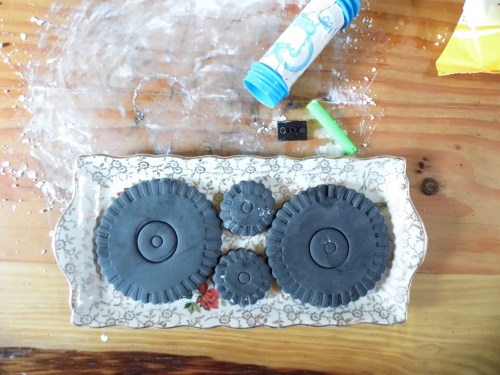 (I read somewhere once to use cornflour with fondant rather than icing sugar in order to stop it sticking. A great piece of advice…)

First, I made the wheels: as I said, they would have hardened to perfection if made at least a day in advance. I dyed the fondant grey-black (YES! I used plastic gloves! I know! I couldn’t believe I actually did that either!! So no black hands for days… Only red ones when I forgot to use the gloves when dying the buttercream icing. Gah!) Anyway.

I rolled out the wheels quite thickly, then with the serrated edge of my largest cookie cutter, I cut out two big wheels. Then with a much smaller one, I cut out two smaller ones. At this point, I checked with a “real” (toy) tractor to make some wheel details. So using very sophisticated tools (a bubble bottle, a felt tip pen lid, a piece of thin Lego) I marked out the wheel details. These were the pièce de résistance of the tractor, I feel!! 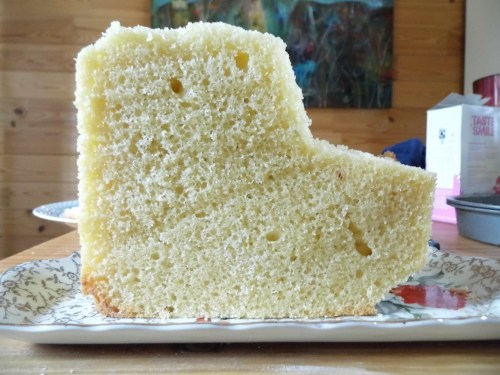 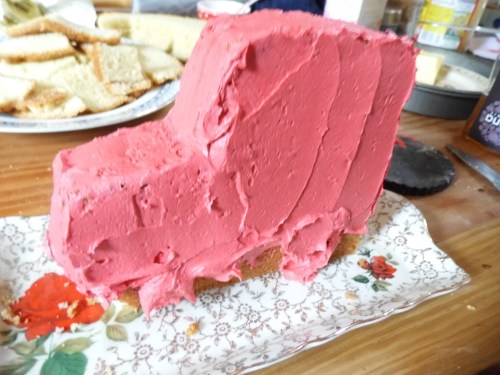 Onto the cake: I made a Victoria sponge, cooking it in one square tin so that I would get a deep cake (rather than dividing it between two tins) I cut out a rough tractor shape. The wheels wouldn’t support the cake, even if hardened: the cake would sink; so I left the base, just cutting in a little at the front where the front wheels would go so there wouldn’t be a big bit sticking out. Once iced, the “undercarriage” platform wouldn’t be even noticed. 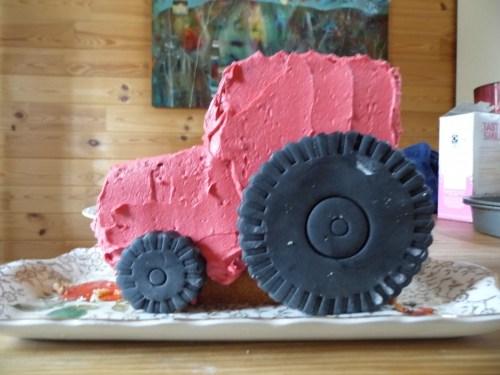 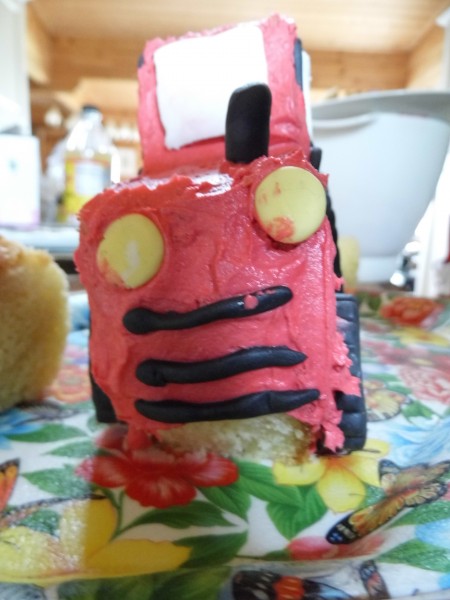 (the lopsided-ness was simply bad photography… I swear!!) 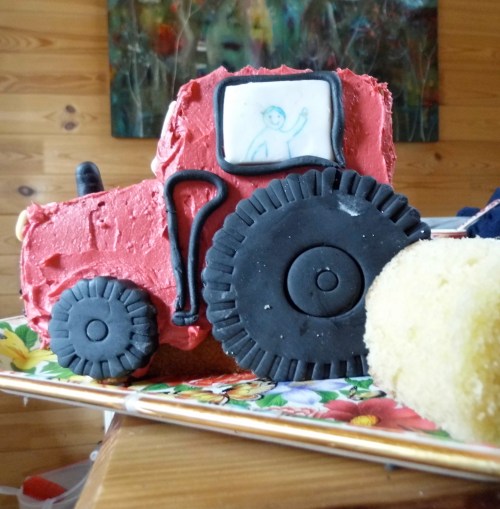 I dyed some buttercream icing (made far too much) a raspberry red (a bit pinker than I hoped, but couldn’t find a deep red colour in my icing box) I slathered on the icing, leaving approximately an inch from the bottom for the platform. I stuck on the wheels, then cut out some rectangles for the windows (the picture of the boy in the window is appalling. I know. My icing pen decided to go wobbly and fade as well as the rushed scribble. Once again, James did not mind, thankfully!) I rolled out strings of black to define windows, doors and the front bit (whatever it is called) Two little flattened rounds for the lights, and we were done! 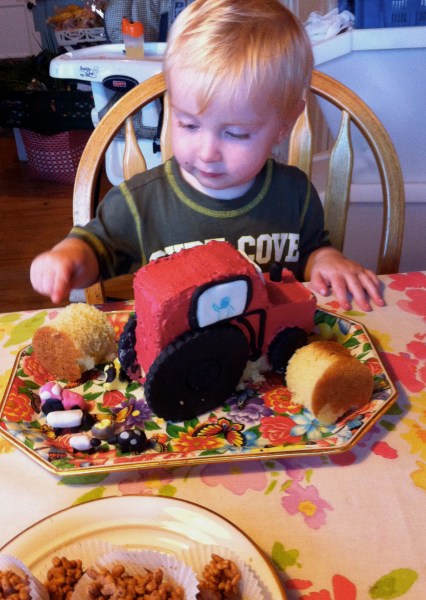 The little man just sat looking at the cake for the longest time, and then, hilariously, after he blew out the candles and we said “let’s eat the cake!”, he leaned down and took a bite out the the cake (what decorum!!) Ahhh, little boys 🙂