Seamus Heaney, Irish poet and Nobel prize winner for Literature, passed away on Friday. The outpouring of grief over the past two days has been extraordinary and comforting: his beautiful words of remarkable lyricism have been poured all over the media; his smiley eyes peering out from every newspaper.

We commemorated his passing last night by reading one of his poems before dinner; our listening children as they absorbed the words and meaning, silent and attentive: this was the first poem I ever truly heard; I was only seven or eight, and the depth of grief and sadness struck me then in the classroom, as though it were my sibling in the “four foot box, a foot for every year”
I remember realizing how profound a poem can be; and in the hands of a master, truly perfect: each word weighted and balanced, sparse lines painting an image so succinct and colourful.

Probably the loveliest thing over the past days has been the stories about Seamus Heaney: his humour, his generosity, his encouragement of other poets. Sadly, sorely missed, leaving an extraordinary legacy behind. Ar dheis Dé go raibh a anam

I sat all morning in the college sick bay
Counting bells knelling classes to a close.
At two o’clock our neighbors drove me home.

In the porch I met my father crying–
He had always taken funerals in his stride–
And Big Jim Evans saying it was a hard blow.

The baby cooed and laughed and rocked the pram
When I came in, and I was embarrassed
By old men standing up to shake my hand

And tell me they were “sorry for my trouble,”
Whispers informed strangers I was the eldest,
Away at school, as my mother held my hand

In hers and coughed out angry tearless sighs.
At ten o’clock the ambulance arrived
With the corpse, stanched and bandaged by the nurses.

Next morning I went up into the room. Snowdrops
And candles soothed the bedside; I saw him
For the first time in six weeks. Paler now,

Wearing a poppy bruise on his left temple,
He lay in the four foot box as in his cot.
No gaudy scars, the bumper knocked him clear.

A four foot box, a foot for every year. 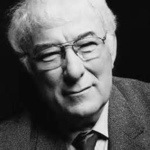