It was my youngest brothers 21st birthday party on Saturday night. Despite that the rain decided to do all its purging on Saturday- was lovely the days before and since- didn’t matter as a wonderful night was had by us all. James (or Big James as we know him, or Jimmy as he is known in his drumming life) is a drummer for Ryan Sheridan; he is fantastically successful on YouTube and is so completely modest and unfazed by all the “fame” ! He works so hard and deserves all his success; we are so proud of him! I still think of James as being the little, cute, cuddly five year old (sorry James, very uncool, I know) rather than the towering man he is now. He nearly drove us all insane drumming on every surface when he was small, but now he gets it out of his system before he get inside for dinner and meals are no longer accompanied by some spectacular drumming solos 😉

I was asked to make a cake along a “drumming theme”, so Fergal and I battled out several ideas before settling on the most ambitious and difficult one (apologies Fergal…)

This cake took a huge amount of planning. Once we had an idea of dimensions of the cakes, Fergal set about making the frame, here it is before the cakes were even made: 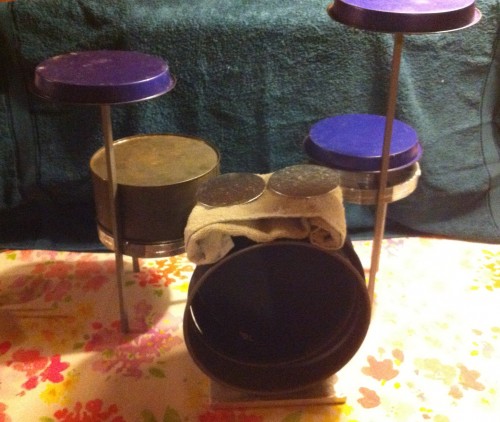 (Details, details! This project took legs as it started relatively “simply” and then pedals, cymbals, and other details were added… Fergal couldn’t help himself 🙂 )

The cakes themselves were last to do. I made them on Thursday: an enormous chocolate biscuit cake for the large bass drum (2 kilos of chocolate!!), and the other cakes were victoria sponges with vanilla buttercream icing. (before the piped details) Once made and cold, I iced them with a crumb coat, then the actual icing layer, dyed green (James’ favourite colour) I had bought an edible lustre spray to give the drums the pearlescent sheen they have. 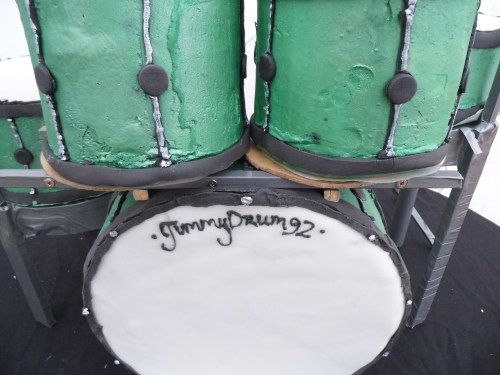 I lay a circle of white fondant for the drum skin on top, then added all the details that suddenly made it all come together: piping little lines down the sides (painted with edible silver paint), small black fondant circles, black piping along edges, little blobs to look like screws, painted silver. The cymbals were circles of fondant painted with gold edible paint.

The final thing was to pipe “Jimmydrum92” which is James’ Youtube channel. I was exceptionally pleased with how it turned out, even though all I could see were the wobbly piping bits and one of the cakes were slightly lopsided… but I think I was the only one who spotted these imperfections!!

James was, most importantly, delighted with his cake, and at the end of the day, thats all that was actually important!