I was *featured* on my sisters blog this weekend: I opened it up to see what they were up to, out there in foreign lands, or to see who had clobbered themselves

(they are prone to accidents/fainting/illness/international disasters)

but mostly to see the progress of her beautiful crochet; 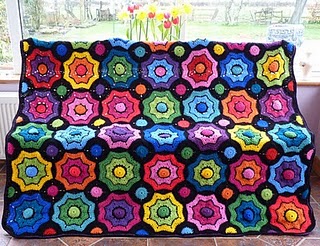 for someone so who couldn’t follow a pattern if it was a life or death situation (me); my sister, the Ginger one, not only reads and follows, but actually writes them! And sells them too!!

For each of my babies, and for any babies even slightly known to us or our family when we were growing up, have received a crochet blanket. Ginger, would produce a blanket, that was not only properly rectangular, but uniform in size, pattern and yarn choice.

Mine was, well… experimental.

So it is no surprise that I am crocheting with relish at the moment these freeform crochet patches. I did stay with the three colours after all, and will probably interlink the lot with Irish-lace-like crochet, I think in black. I want the black crochet web in between to be looser, so it doesn’t get too dense and stiff.

This is my plan: I’m hoping to start on the black yarn tonight for when I collapse onto the sofa and babies are in bed, pot of tea beside me…