So, the Wee One and I decided that it was time to make some mincemeat, as Christmas is fast approaching. Every year we make mountains of the stuff, and eat mince pies for weeks before, and weeks after. I use a Darina Allen recipe, although, me being me, I have to change it somewhat (it’s a great place to start). The way I see it, anything that has butter, suger, fruit and pastry, in whatever proportions, has to be truly divine.

This is the recipe- as I said, I have doctored it a little… 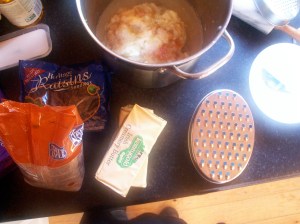 4 cooking apples, cored and baked in a moderate oven (180’C) for about 45 minutes, then left to cool.

The rind and juice of 2 lemons.

450g of butter, grated (I put mine in the freezer the night before, and then it is eay to grate without it melting as you grate) 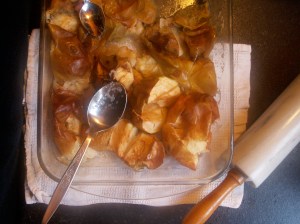 Remove the skin and mash the flesh of the apple, with the lemon. 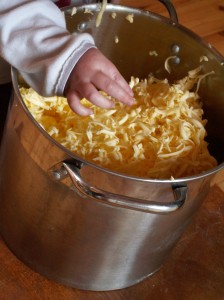 (I had to remove little fists full of butter many times, she would have gobbled up the 450g of butter without any hesitation)

Add the butter, fruit, salt  and sugar one by one, Put into jars and cover with jam covers, or into a Kilner Jar, as I have done here. Leave for at least 2 weeks to mature before scoffing greedily at every opportunity.

(I have to admit, that after looking at the jars of mincemeat for 2 days I had to make a tester batch tonight. Let me assure you, that even after 2 days the mince pies were oh-my-gosh scrumptious. We have now come to yet another executive family decision that these jars will not last until Christmas and that we need to make another batch (or several more batches) a.s.a.p to keep our mincepie-cravings satiated)

(I am linking up, and adding this post to The Christmas Craft Collective Blog– do check it out!!)