Craft Advent, day 11: This next craft is so simple, and so much FUN. But then, all of what Naomi from Dr. Hows Science Wows does is fun: science made interesting and accessible and most of all: relevant! Naomi’s blog isn’t just science concoctions, but interesting news in the science field, discoveries, natural science: mountains of interesting “stuff”. I met Naomi for the first time last week, after being virtual friends for the past year or so; we were delighted to be able to take part in a workshop that Naomi was giving. The kids made volcanoes and glow-in-the-dark slime, and absolutely loved it. On the way home, I heard Grace talking to Liam about “Carbon ‘bioxide'”!!) So between Dr. How and Minecraft, I think we have science and geology covered pretty well!

We are slowly in the process of decorating here, and I know these Snow People will be featuring in one of our displays… along with Sadhbh’s reindeer from a few days earlier (with masses of fake snow. Now that I know where it comes from… keep reading 🙂 )

These little snow people were created by accident recently as I sat and watched my kids enjoy some puffy painting. I liked the three dimensional effect of the paint but felt we could do more with it than just popping it on paper. I always keep lots of bits and bobs that might come in handy for crafting moments so it didn’t take long to connect the lovely puff paint we had just made and the bowl of corks sitting on the window sill, waiting for a bit of recycling.
Corks and puffy white paint were made to come together and make… little snow people. It is really simple but I love the results, and so do the kids. 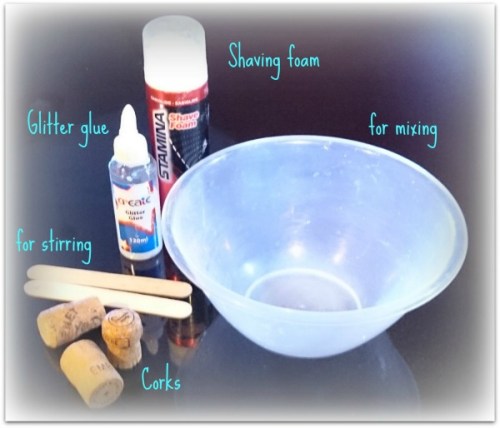 To make the puff paint just mix shaving foam and PVA glue; we used a white glitter glue with lovely fine, shimmery glitter through it. Mix about two parts shaving foam to one part glue, although this is definitely not an exact science, just play around with it and see what you like.

We used large lollipop sticks to spread the puff paint all over the cork, in a fairly thick layer. We then added little strips of Christmas ribbon as festive scarves and inspiration struck again when wondering how to add the eyes, nose and buttons…. We used aqua beads. Small buttons or similar could work really well too. 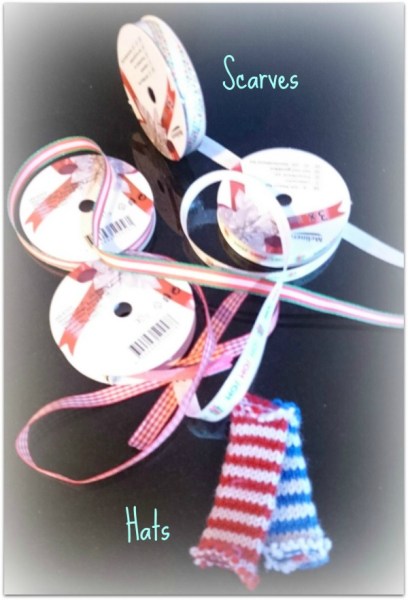 We found some little knitted hats in a puppet craft set and decided to add these to some of our snow people. All that was left then was to wait, and wait…. and wait a little more. It was hard to keep little fingers away from these guys but it did take about two days for them to dry completely. 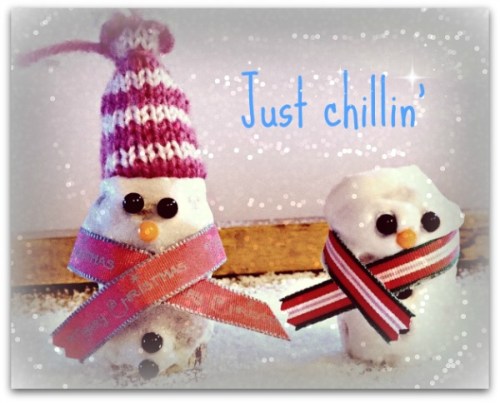 These make lovely mini Christmas decorations; we have made a whole family at this stage. If you have a small old mirror you can make a nice little snow scene. We sprinkled some fake snow on the mirror to create a little winter scene – commercial fake snow is a polymer called sodium polyacrylate, found also in babies nappies (diapers), so if you want the same effect but have none of the commercial stuff to hand just take the inside out of a nappy and add a little water! 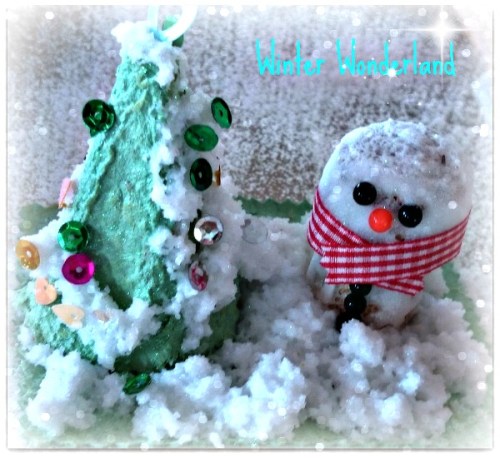 We got a little carried away and added some fake snow to the remainder of our puff paint. It made very cool, thick bumpy snow so we have covered some cardboard with it and created another little snow scene that the kids really like.  I think this little project will be recreated many times over the festive season, it is lots of fun and limited only by the imagination.

WOWWW! Off to raid the can of shaving foam and take apart a few nappies!!! 😉 😉