Years and years ago (probably about thirty years ago; eeeeee, I’m getting old!) my sister had a “HB Ice-Cream” cake for her birthday. I can still remember collecting it from the shop we ordered it; it was in a freezer-box, and when we opened it, wow, So much ice cream! It was like a fairytale cake, all white and fantastical. Sadly, they discontinued making them by the time my birthday came around (I’ve wonderful memories of a hedgehog cake for my birthday, which I am also going to make one of these days. I never remember when a birthday is drawing near) but I’ve been living vicariously through our Liam for the past few years and making him ice cream cakes (at his request, of course) Not as beautiful or perfect as in my memory, but delicious nonetheless.

This is incredibly simple. Almost embarrassingly so. 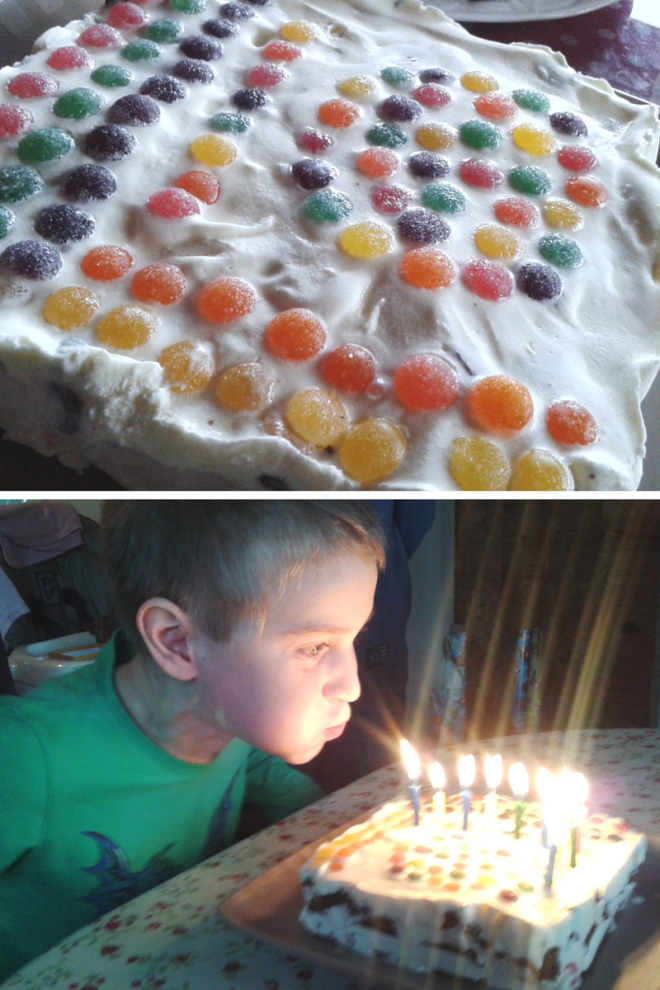 {A note of caution: Liam likes JellyTots in one of his layers; to be honest, this isn’t advisable, as they freeze and become like little bullets, liable to break a tooth or three. But it is his birthday, and he loves them in the cake, so we warn everyone well in advance and hope no one falls foul.}

Ingredients:
Iceburger Ice cream bars (I bought a box of four; I thought I read that it had six, which would have been perfect, size-wise, but four did the job well enough) 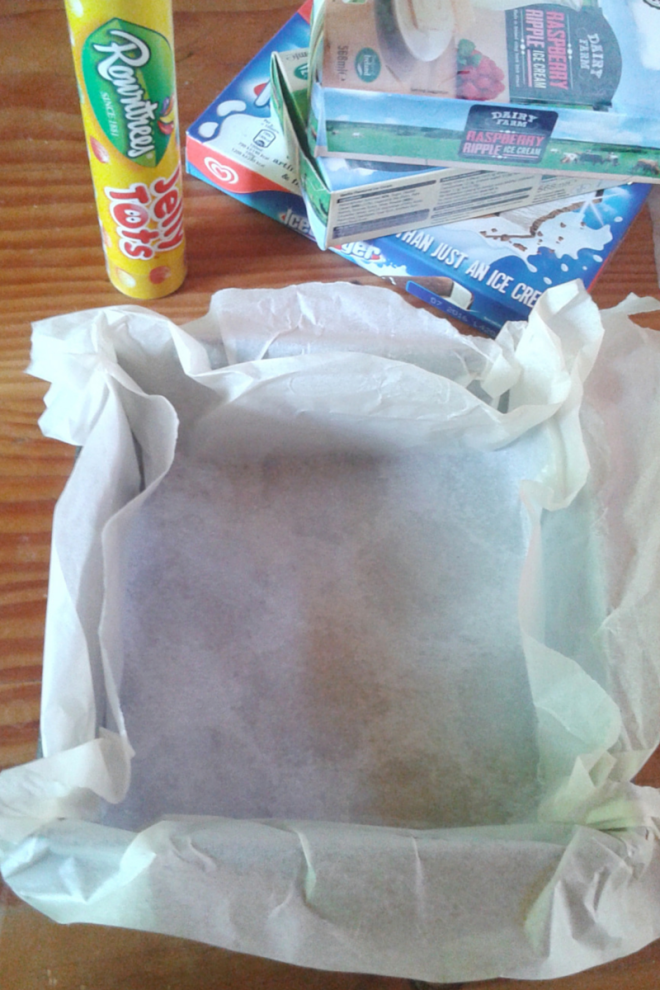 1 large bar of chocolate (I used an Aero, easy to crumble) 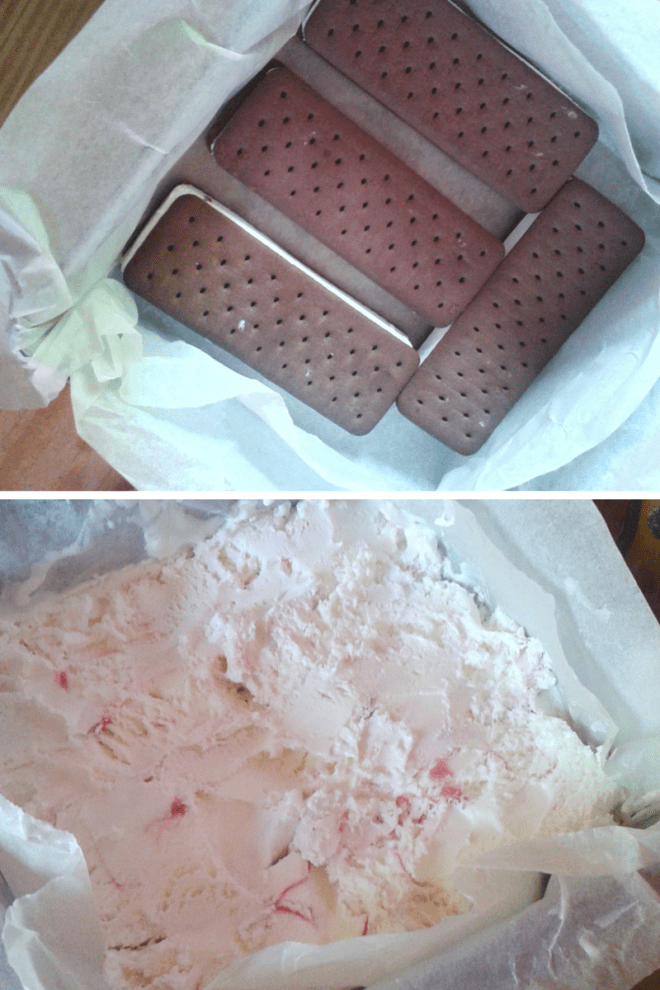 To Assemble:
First, line a tin (mine was 8″ x 8″) with greaseproof paper. You could use cling film, but I always find lining anything with cling film to be a nightmare (if anyone has some great tip, please, let me know)

Line the base with the Iceburgers.

In a bowl, mash one block of ice cream to make a bit easier to spread, then spread it out over the Iceburgers, pressing into any gaps to make a solid layer. 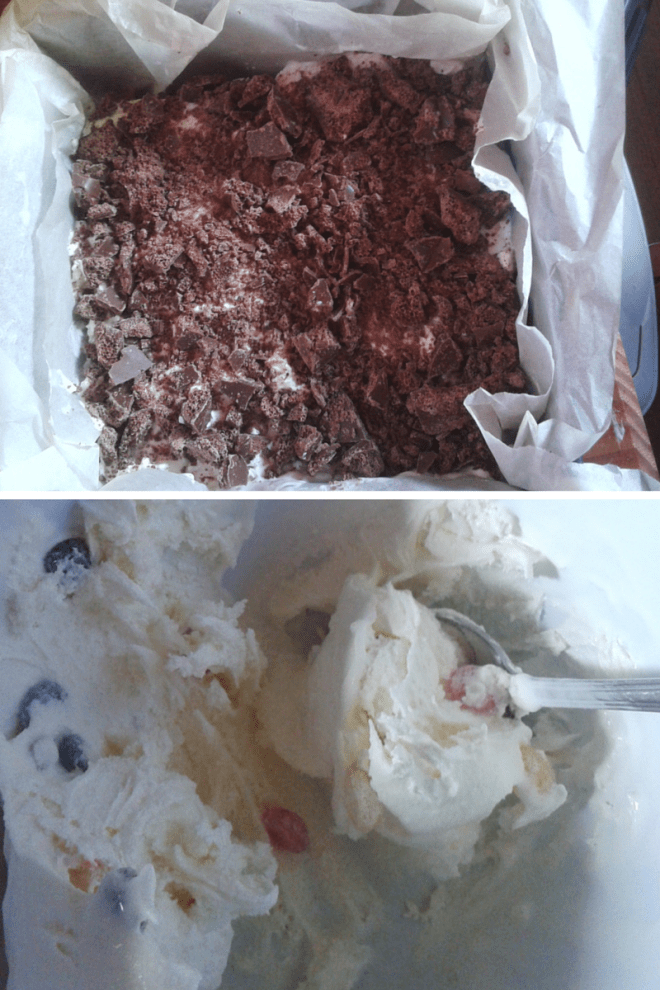 Crush the chocolate (or grate it roughly) and spread over the ice-cream layer.

Mash the second block of ice cream (this is where I added in the JellyTots. DON’T DO IT!! 🙂 ) and spread it over the chocolate. 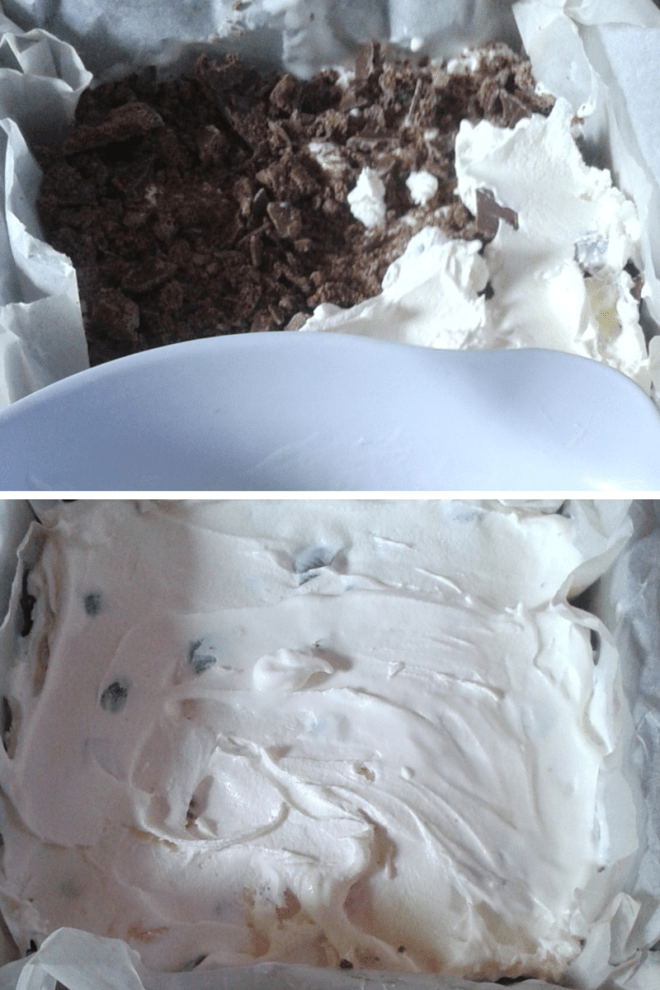 Smooth out the top and decorate (I was faffing around a bit at the start, and almost ruined the cake by letting it melt too much while I worked out rainbow patterns. But as soon as my children began to swoop in “for just one more JellyTot” I worked at speed before I had a tin of melted ice cream and no decorations for the top) 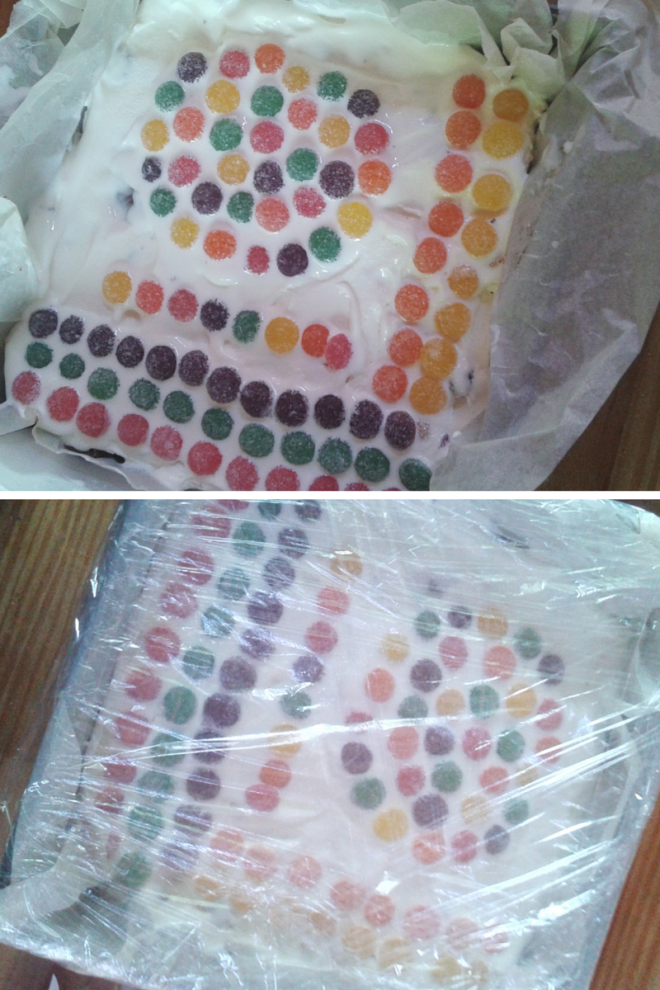 Quickly wrap cling film around the tin and put in the freezer to harden. Be prepared to serve and eat with haste… This cake doesn’t like to hang around looking pretty! But for its ease, simplicity and deliciousness, it is worth it!