I have this sideboard-cupboard thingy in the kitchen. It was an el cheapo purchase a few years ago which has repaid itself several times over, it is a cornucopia of exciting finds: drawers of art materials, socks, notebooks, random stuff, artworks.

My kind of cupboard. 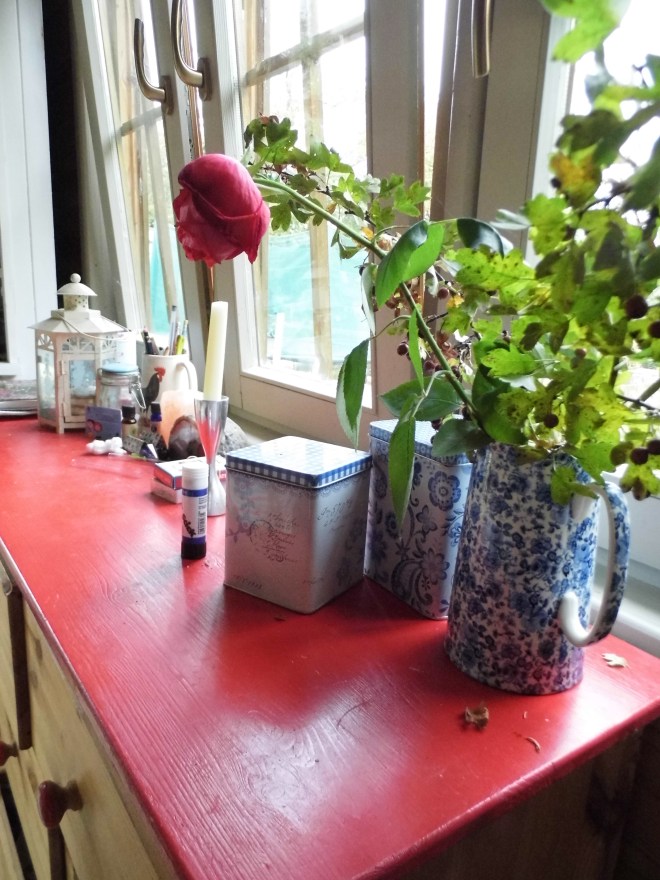 I painted the top and knobs a bright red last year whilst in Crazy-Pregnant-Lady-Has-To-Paint-Everything-That-Doesn’t-Move phase, with the idea that (as this is the main point of focus when coming into the kitchen) it would be kept tidy and uncluttered and like something from a magazine (or Jane’s house).

Well! Needless to say that didn’t happen. Ever. It was home to a towering mess most of the time, and even when I tidied it off and made it lovely again, within minutes, it was back accumulating “stuff”. So this week I did a little experiment, in order to understand why and how this really happens (I assumed it was some scientific explanation worthy of Dr. How’s Science Wows, to do with magnetic poles and force and geopathic stress lines. Thankfully I didn’t even broach the painfully embarrassing question with Dr. How, as I soon learned a lot about our familial habits thanks to my little study)

Firstly, please note, I’m appallingly untidy. I just am. At any given moment, I have several boxes of projects on the go. At present, I have piles of small canvases, a box of paint and a few watercolour notepads on the “making” table, as well as my sewing machine, doll body parts and my crochet. That’s just one small table. Hence, I don’t have very high ideals for my children.

So, yesterday, on a fine morning, I cleared off the cupboard, and took a photograph [Exhibit 1, above] (in the 10 seconds it took me to turn on the camera, the Pritt Stick had landed) Slowly, within half an hour, things began to drift to the cupboard top again: 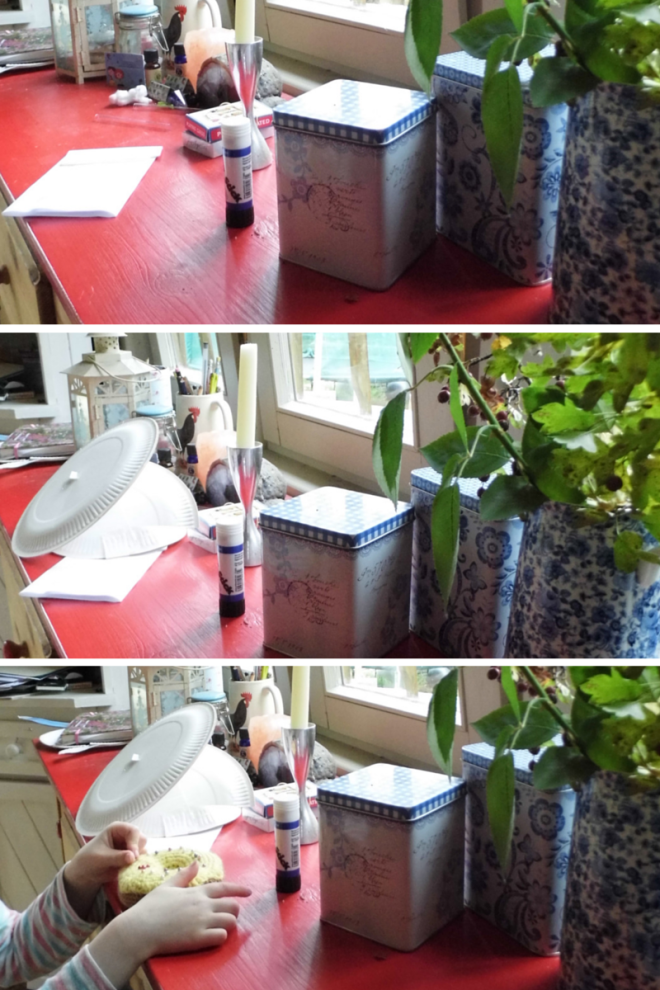 Grace asked me what I was doing, so I explained.

Grace decided to “help” by doing what she does best: arranging the stuff artfully: 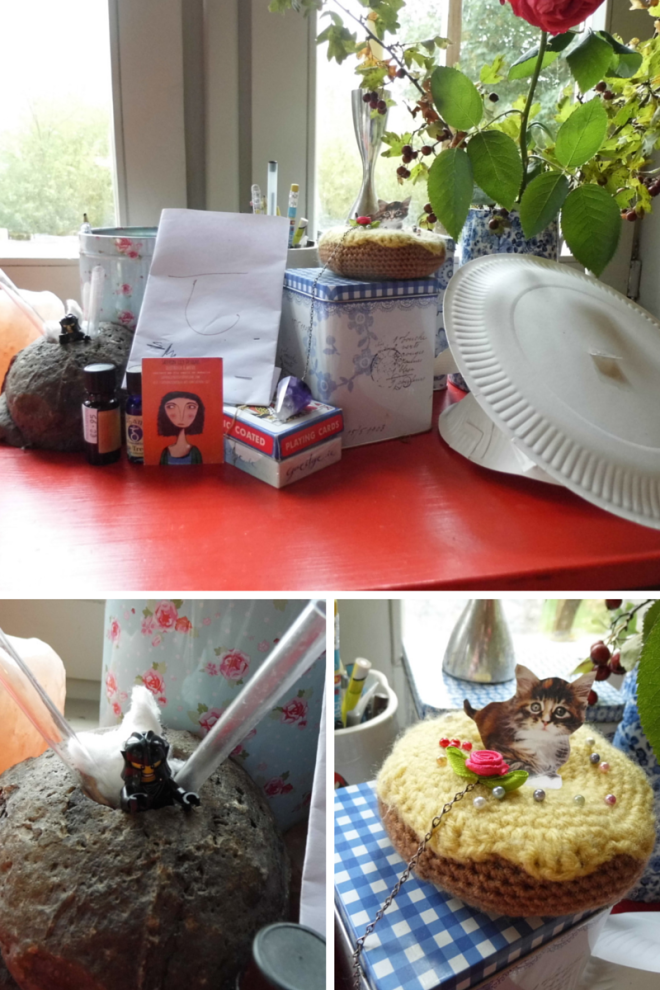 Then she decided to decorate the house for Christmas by sticking dicky-doo-dahs onto the window. And wrapping up presents (which were filled with our belongings) and arranging them, also artfully, with a book of quotes open, to be left there until Christmas. Our kitchen soon began to resemble a large art installation, held together with Sellotape. 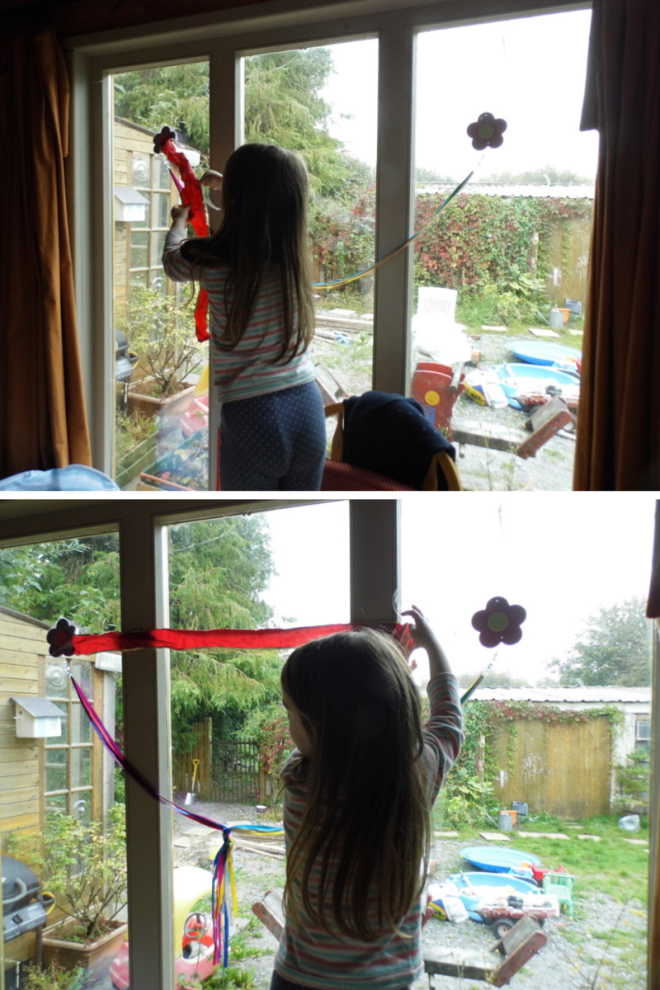 And the cupboard, within minutes, started to accumulate. This morning, I took this photo: 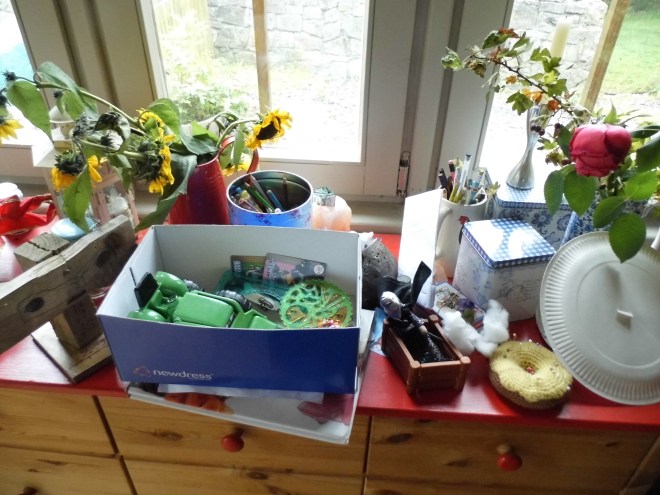 …while in the background a little girl was working her way through six pages of stickers, a large sheaf of paper, one pot of glue, pompoms and two tubs of glitter. A small blonde boy was spreading  shredded paper on the ground so he could “plough” it with his tractor; two larger boys were making origami and a wee baby was howling to get in the middle of it all.