I was to post this on Sunday night, after I came home from a quick trip to my home place (two hours away) to see my brother Robert, who had come home from Canada (couldn’t resist giving him a well-earned bear hug after 8 months away) The only minor problem driving up was a snowy patch of high ground; but a mere two hours later told a very different story: we slid and slipped our way for the first few miles before we decided to turn around and go back to my parents for the night, the roads were covered in black ice and lethal.

So despite my long list of “to-dos” for that night, we had an impromptu over-night visit home which was simply lovely, and came home yesterday when the temperatures were mild and roads were clear (of ice. Not appalling speedy drivers who were out in force) Which brings me all the way back to this post: we had planned a party on Saturday, a kind of Christmas/Solstice party to kick off the seasonal celebration (This is a lovely blogpost about the Solstice on the Where Wishes Come From Blog) As the weather progressively worsened throughout the week, I was sure that no-one would want to come; but as it happened, we had, as always, a really wonderful day, with lots of fantastic company. We are truly blessed that we are surrounded by such great friends. We lit the house with tealights in every spare jar (I have a whole stash. Of course. Hoarder Of The Year alert) which created the most festively atmospheric setting, and hid all the major untidiness and dusty corners (definitely win/win)

We ate and chatted until very late, drinking pots of tea and fragrant mulled fruit punch. There was far too much food, but that’s always a great complaint! I want to mention here two desserts that I made, as they are simple to make, and really delicious (as well as looking very celebratory). If you are dithering over what dessert to make for The Big Day, both of these would be an easy, yummy choice. 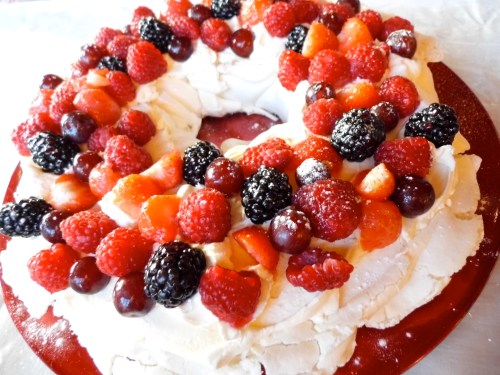 The first was a pavlova (recipe here) in the shape of a Christmas wreath, and decorated it with cream and fresh fruit; this was also so simple, yet looked far more labour-intensive than it actually was: When I made the pavlova mixture, I put dollops in a wreath shape on the greaseproof paper. When it cooked, it expanded a little, but retained the wreath shape. I let it cool completely, then slathered on  enormous amounts of double cream and artfully (!!) arranged the fruit (while fending of my three fruit-loving smallest ones) (they had eaten half the bowl already) 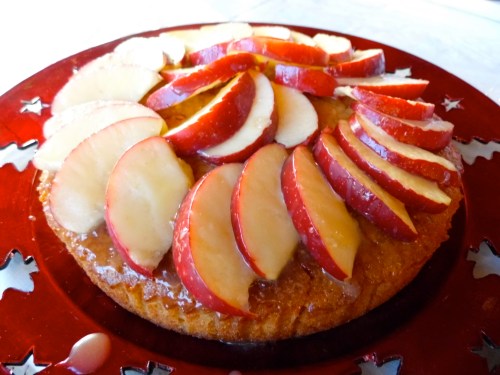 This Toffee Apple cake is the second dessert, one that I’ve been waiting to make for several weeks. I used Caitriona’s recipe from her wonderful Wholesome Ireland blog. It was as delicious and toffee-y as I had hoped, and not at all a difficult make. Full marks for this too 🙂

I had my bottles of Raspberry Vinegar, Vanilla Sugar and Vanilla Extract -labelled at the last minute!- as presents, and I made some fudge too. This must be the tenth time I have made fudge. I usually end up pouring the fudge sauce from the greaseproof-papered tray into a jar, as it has never, ever set for me. But! Yes! This year, not only was it delicious, it set, and didn’t leave me a weeping mess of Fudge Failure. A fellow blogger Jill posted this recipe on a forum somewhere; it will for sure be one I return to again and again. The recipe for the Chocolate Peppermint Fudge is here. 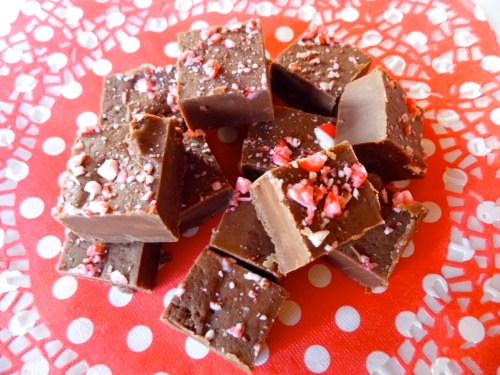 I was originally going to put the squares in pretty jars, but I had them all delegated to the tea-lights, so I cut a square of greaseproof paper, put a very nice doily in the centre and a pyramid of the fudge in the middle. Then I gathered up the sides, tied them with a pice of twine and added a tag. It was a very easy, satisfying present to make (and tasty too 🙂 ) 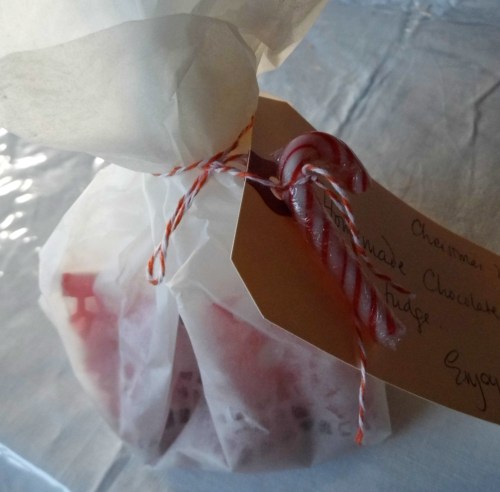 My plans for later include a Toblerone Shortbread (recipe here) for all the Toblerone-loving men in our house. And now I must go: shortbread to whip together, sprouts to prepare, stuffing to make 🙂

So from our house to yours, I wish you every blessing for  peaceful, healthy and happy Christmas X