A blog-friend recently posted on a forum about an online competition she was entering, organised by MoneySupermarket. The deal was this: you registered your interest, they sent you £50 (almost €60) and you gave a room in your home a makeover, then blogged about it, explaining how you did it and how far you stretched the money (and not only that, but be in with a chance of winning £500 B&Q vouchers… Wouldn’t that be so brilliant?)

I faffed about for a while, thinking I would perhaps do the sitting room… Or maybe the living room… And there I was, sitting as I usually do, on the step of our porch drinking my tea one morning, when I had the thunderbolt of lightning (a.k.a. Inspiration): I would make-over the porch! 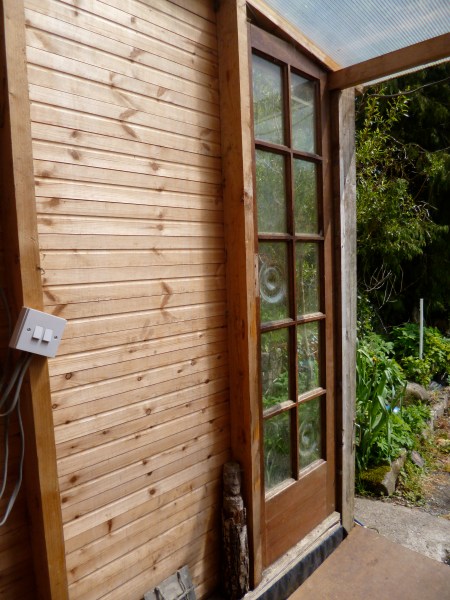 Ah, yes, the porch. Fergal built it a couple of years ago, to be a buffer zone from the back door to the garden, somewhere to put boots and hammers, bits and pieces that didn’t live in the garden, but were in too frequent use to be put in the shed. It soon evolved into a general dumping ground, albeit a warm one (Perspex roof, bright and warm most of the time) and became somewhere that we often sat, especially in the mornings, and where the little ones would play when it was mild outside, but just too wet to actually be outside. My mother spends a lot of her time in there communing with GrannyCat when she comes to visit too! 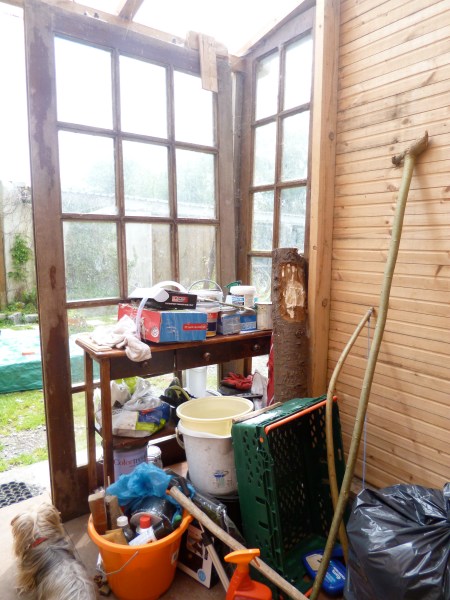 I started with no actual plan (do I ever?) and this evolved over the week. I wanted to use the little table already there as it is a great size, not bulky and has shelves: 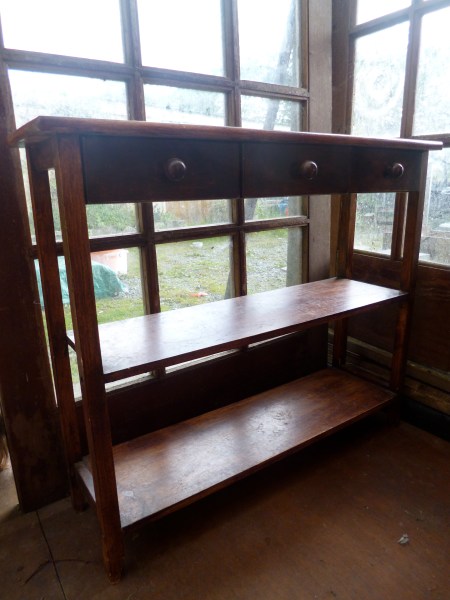 I bought that at auction for €5. It was an awful colour though, so I took myself off to our local hardware shop to buy some paint for it. While I was there, I spotted tins of Colortrend paint which were end-of-line and half price! I picked up this tin of “Gooseberry” for €18, for the walls; and then had the very helpful shop person mix me up this small tin of paint for the table 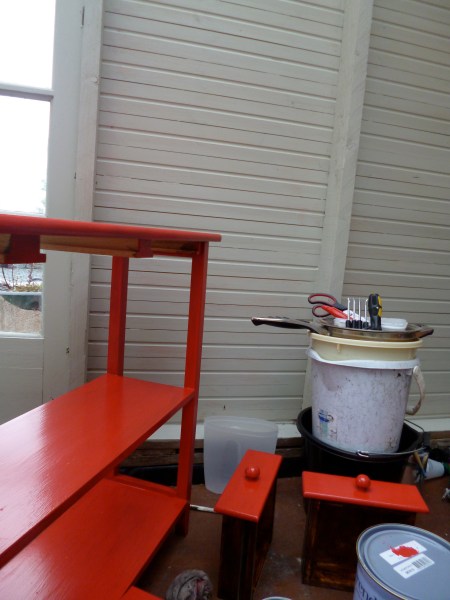 (Movie Star red, also Colortrend. He was evangelical about Colortrend, and I have to say it is absolutely beautiful paint to use) This was also €18.

I started on the windows. I (humanely) rehoused all 4,683 spiders in residence, swept down the windows then washed them well. While in this burst of energy, I actually started masking-taping around the panels to avoid paint splattered windows, but after two I decided that I would prefer to scrape every window rather than tape them. Thankfully I discovered I have an hilariously steady hand, and so the glass remained clear (we won’t mention the paint splattered floor, dog, cat and every passing child) (I am also down one cardigan, and my jeans have a fetching painterly quality to them)

The Gooseberry paint, while looking very green-y in the tin, was in reality a very, very pale green-greyish cream (make any sense?) I am SO pleased with the result. Immediately the whole room looked bathed in light even on the many dull days we have had.

Next I started on the side table. I lightly sanded it down, then applied three coats of Movie Star red to it. The first coat had me in palpitations because it was awful, but once I had applied the second coat it began to look as I had imagined it should. 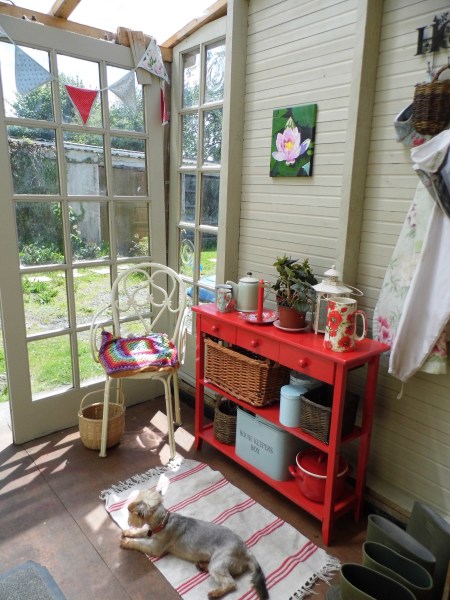 The chair is one we had in the garden. The rug we bought in Ikea a while ago… For 39c if I remember correctly? All the baskets and tins are thanks to persistent hoarding… And friends who have spectacular taste in gifts. The painting is by my cousin Yvonne Blanchfield; I bought it at an art exhibition a couple of years ago. 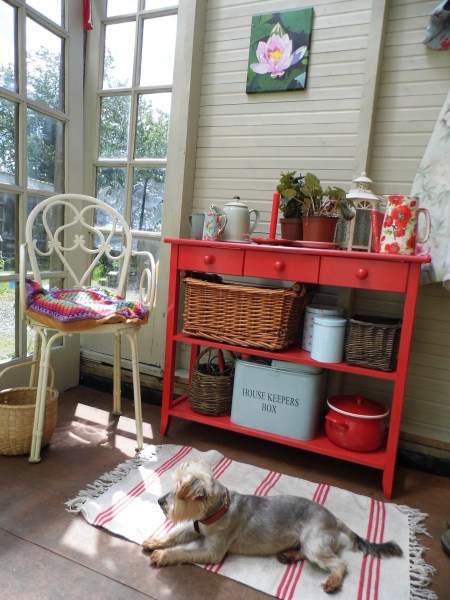 Oh, and bunting. Every room should have some draped somewhere. It’s an affirmation of a long warm summer ahead 🙂

In total, this makeover cost me €41.00 (the rest went on Pebbles’ haircut) 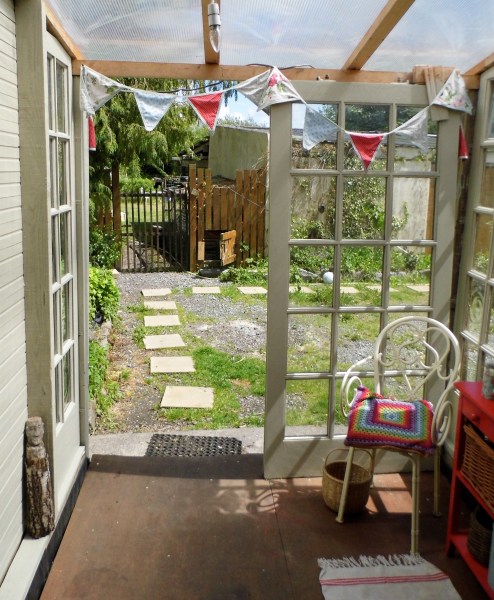 Disclosure: Thanks to Money Supermarket for providing the £50/€60 for this makeover challenge.