There always seems to be an ever-increasing bowl of bits of soaps accumulating in the bathroom (Many bars of (expensive) Dr. Bronners were used as boats in the bath while my back was turned… the bath smelled lovely, but the soaps were miniscule by the time I rescued them from the depths of the bath…)

I have been considering the art of soapmaking for many years now (children+lye=disaster was the formula I was going by as a reason not to), but recently a blog-friend, Erin, made soap, and I was just bowled over by the colours and textures… it could fast become an obsession I feel… Unfortunately, with a wake-y baby still, I have to put off “real” soap making for the minute and indulge in the easy, el-cheapo version: simple, recycled soap that the little ones can help with.

We gathered as much soap parts, half bars, etc from the two bathrooms. I used a bought bar of blue soap to add some colour into the mix, and chopped everything up into quite small pieces, then put them into a Pyrex bowl.

We covered these with water and let stand overnight. The next day, we put the bowl over a saucepan of simmering water and melted everything down; this took a lot longer than expected, and so, before it was fully melted down we made the executive decision to just pour into the mould, with a few chunks which would ultimately make a pattern (we hoped) 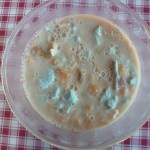 Before we poured we added 4 tablespoons of coconut oil to make it more moisturising (you could also use olive oil or any oil of preference) and 10 drops of lavender oil, stirring to infuse this into the entire mix. Our soap was also not the most lovely of colours (I think I may have even heard a child mutter “snot-coloured” from behind his hand) so, in the absence of “proper” soap dyes, I used a tiny, and I mean tiny amount of red food colouring paste (the tip of a cocktail stick) into the mix. This brought the colour from “dusky pink” (cough cough) to a definite pink (with blue and golden coloured chunks) We covered a 2lb loaf tin with baking parchment and poured the melted-with-chunks mixture into this, then set it aside for 24 hours.

The next day, we unmoulded it, then cut into delicious slices of soap- the chunks did make a pattern after all! We separated the slices with parchment, and now have it stored in the hot-press (airing cupboard) in a brown bag to dry out and harden for a couple of weeks.

I posted this early on in Advent in order to give you time, should you indulge in this heady pastime, to make the soap and let it harden a little- make it this week and it should be perfect in time for Christmas gift giving! (you could always use it straight away too, it will just be a little soft)

Tomorrow I’ll be posting another craft that you would need to make now for Christmas gifts… at this rate, you will have all your gifts made in plenty of time, to allow you the last few days to chill out and relax in order to enjoy Christmas!!