I was hoping to join in the Yarn Along yesterday… had half a post, half-written…

then got side-tracked by a day that rumbled along unexpectedly, to the soundtrack of shrieks and hoots of laughter from the boys upstairs (they have built a “Lego City”, and yesterday there was an epic game happening up there. Grace and I only saw them for food) Our little girl was bemoaning the fact that she had no wings to go flying, so we decided to remedy that: I cut out a wing-shape from some watercolour paper, saturated it with water, then she painted it, exclaiming at how the paint spread in sunbursts and mingled together (it had started as very sedate pink, but then a rainbow took over) A spot of cleaning up.

I should have photographed the other end of the table later on, where the boys and little girl were eating several kilos of fruit (we had just received our organic fruit and vegetable order from Beechlawn farm, and needless to say, the fruit didn’t last long) There was a huge bowl of skins and pips, and little ones with fruity faces!! 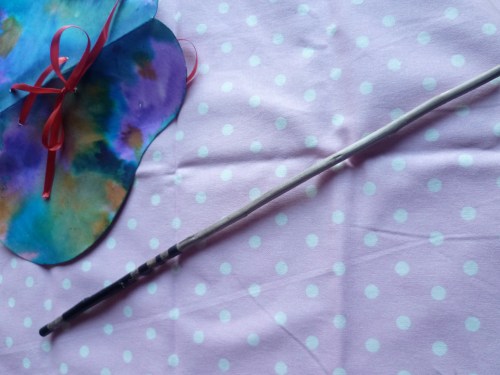 When Fergal came home, he was immediately roped into wand-making, so he and Grace went out to the sally garden to cut some 12 inch narrow wand-like sticks. He peeled the skin off the wand, then carved the skin on the handle. 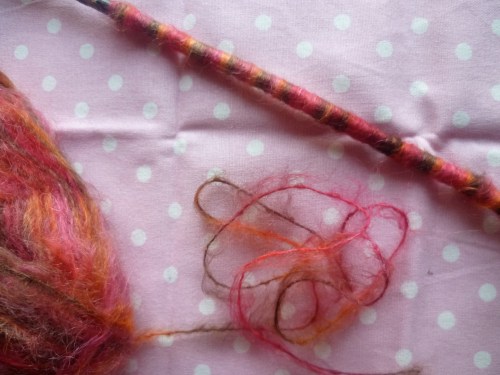 Then we wrapped one of the wands in yarn; 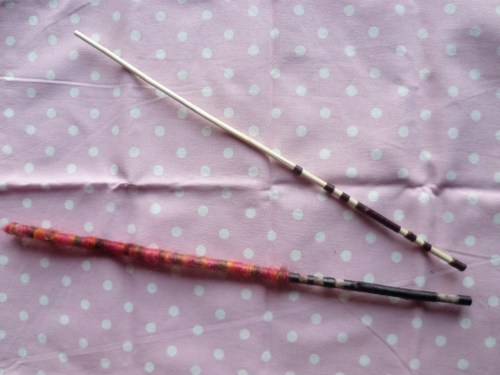 it was so simple (well, I cannot vouch for the carving bit, but the yarn wrapping was!!) and there is a very happy little girl wandering around today in “fay-wee” (fairy!) mode! The day was also punctuated with baking- my sister in law is due her third baby in a couple of weeks, and Fergal was to see her today- so I decided to make some shepherds pies and quiches for those many days where she will be too tired to cook, and some cookies too. If they hadn’t been scoffed so fast there would have been a second batch winging its way down to her, but the boys in our house, both big and small, made short work of them… and unsurprisingly, really: they are incredible moorish.

I’m quite sure I posted this recipe before, but can’t find it… So here it is: simplicity in itself.

(I must add before I do, that I borrowed this from my Gingerbread sister, who in turn borrowed it from Peggy. Peggy: we are eternally grateful)

Take a piece of grease-proof paper, spoon dollops of cookie mix into a line, then roll up the paper into a sausage shape. Put in the fridge for at least half an hour until firm, then cut small round discs (approximately 1 cm), place on a lined oven tray and bake in a moderate oven for 10-12 minutes. Be warned: these will be completely soft when after 12 minutes, but firm up as soon as they cool down, so as soon as they turn golden (after 10-12 mins!!!) take them out or they will be like little rocks (I speak from vast experience) 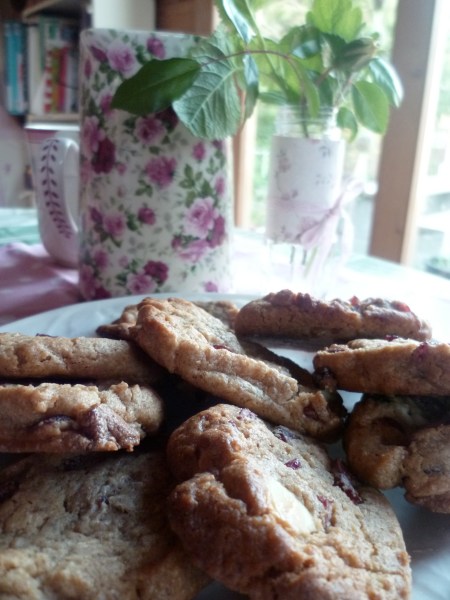 These make really super gifts, either baked or wrapped like a sausage in greaseproof paper; I also try to keep a few rolls of the dough wrapped in greaseproof in the fridge (and they can be easily frozen) but the rolls-in-the-fridge-theory rarely lasts long…!