In Ireland you are obliged to register with the Department of Education if you Home Educate. And so, the day before we were to depart on the ferry to Britain (I was speaking at a conference in England at the weekend) we welcomed an Education Assessor into our home. Needless to say I was slightly anxious about all of this, and spent the day before tidying and organising.

The evening before, Fergal had to go somewhere, so I brought the two older boys to karate, and then came home with the two smaller ones to make apple tarts until we had to collect them.

And how it rained! It was one of those dark, dark evenings when the 20 second sprint to the car renders you like a drowned rat. So we began to make apple tarts, smallest boy and I, while the Wee One played on the floor. After two minutes, possibly three, I turned to check on a quiet little girl. She was playing “making apple tarts” with a plate of flour (!) “Eeek!”, I thought, then decided to leave her to it, we resumed our tart-making. Within minutes she was stripping: 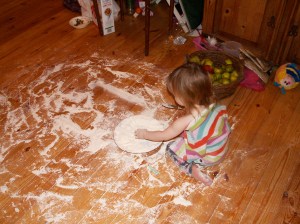 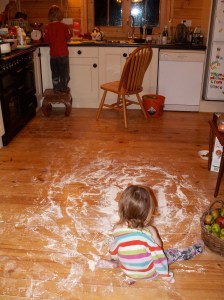 seconds later she was almost naked, swimming on the floor of flour saying: “look mama! I’m a penguin!!”

(how could I do anything but laugh- she pronounces penguin as “pen-goo-in”!)

Hours later, after she part-turned to dough as soon as she ran to the car (flour+rain= very bad combination), two tarts baked, 2 boys home, a soaking bath, a protracted bedtime (it never goes swimmingly when you need it), Fergal and I started into the cleaning of the (white, floury) house.

The following morning, our visitor arrived and, apart from the dog pooping all over the floor (something that has never happened before. Ever), it all went well (whew). Really, really well (and whew again).

And by lunchtime we could sit eating some delicious apple tarts, at peace that the visit was successful, in a gloriously clean, tidy house (not that that lasted long) with the dog, firmly, outside.