Yes… it looks like a massacre. And it was… in ways… (it being Hallowe’en, we have to keep to a theme) my middle son 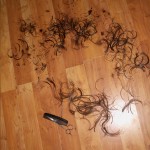 (8) has apparently wanted a hair cut for yonks, and I apparently was refusing him “permission” to do same… so after his (annual, ha ha) bath I brandished the scissors and comb and began to cut (butcher) with a heavy heart. His hair was gorgeous, wavy curling locks well past his shoulders (I have always yearned for curly hair!), and now (sob sob) it is… well, ultra cute, a la Pixie-ish, but SO much shorter. He wants a blade 1 or something (what’s that????) but I’ve said we’ll hold out on that for a bit (some googling on haircutting needed)

And keeping to the theme… we went trick or treating to my friend Ness’ house: as always her home was gorgeously decorated- 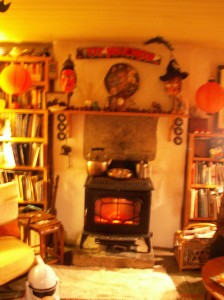 I know the photo isn’t great, but when I took one with the flash on it looked cold and uninviting… this one has the ambiance) Isn’t it lovely?? There was a selection of delicious treats, sausages, rock buns and pots of tea… sounds like my kind of party!!

And then home to our house where friends came over, and despite the late hour, we stayed up until the wee hours drinking even more tea and eating “Fidelmas Biscuit Cake” (well, a version, not as DELICIOUS as the real thing, but I’m working on it…)(In honour of Fidelma who was really unwell last week, but thankfully, improving) and cupcakes, fruit, Barm Brack… it was great fun. 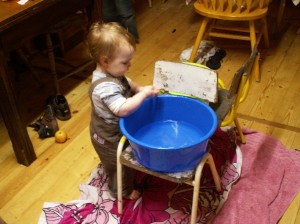 And our little baby, who’s no longer a baby had her first dunking session (there was quite a puddle after this event let me tell you!!)