I recently made this My Little Pony “Pinkie Pie” cake for a very sweet little girl’s sixth birthday. I made a large round chocolate cake using this “Never-Fail”s recipe from Smitten Kitchen (thanks once again to Maud who pointed me in the direction of this frankly brilliant website, I just went on to get the link, and half an hour later have bookmarked about 30 recipes that I know will be just sublime) (Tomorrow, I am trying “Best Chocolate Pudding“. Or maybe tonight. Seriously, how could I stop myself?)

Anyway, apologies for that little foray into Smitten-Kitchen-land… back to Pinkie Pie. Grace and I spent a lot of time the week of the party discussing the decoration for this cake. I wanted something effective, and relatively simple; Grace wanted a life-sized Pinkie-Pie which had layers of rainbow sponge when you cut into it.

Needless to say, I won. I love decorating cakes…. when I don’t have six children present, three of which are hellbent on “helping” me (which means I’ll start decorating cakes at a rather fabulous level in about 17 years time) But until then, I relish the challenge of making relatively-simple but child-pleasing cakes like this one here. It really is a matter of rolling out icing and cutting it into shapes (with a little swirl of a paintbrush here and there)

So, To The Cake Tutorial! This method can be used for almost any picture (simple shapes are best)

Firstly, I printed out a (Grace-approved) picture of Pinkie Pie, large enough to fit on the top of the cake. 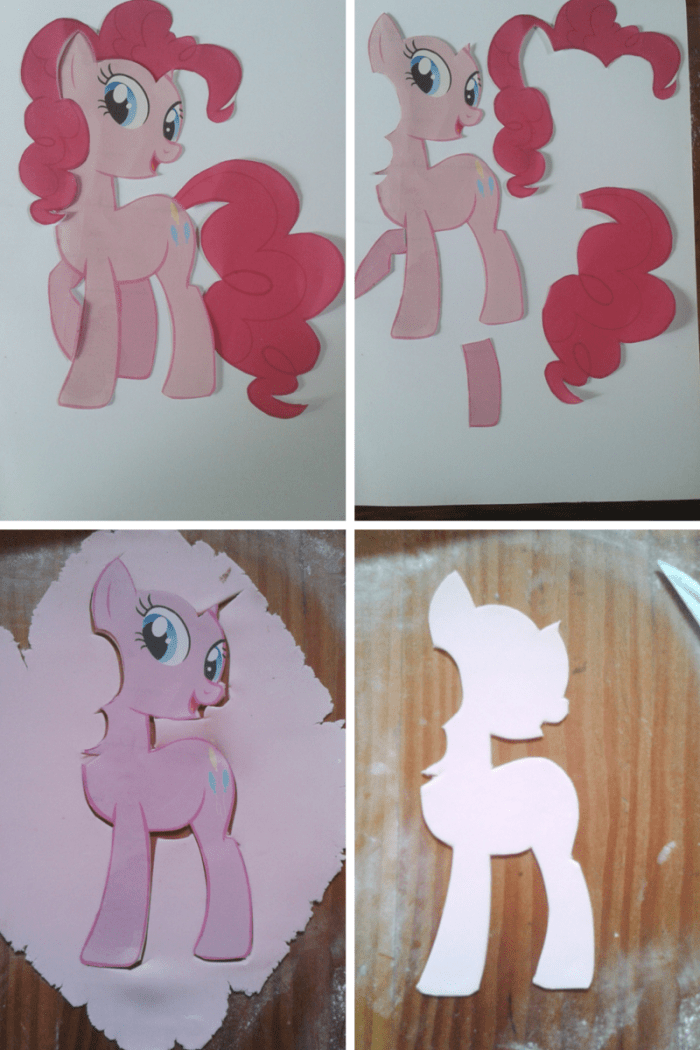 I cut out all the component parts of the picture, then rolled out corresponding coloured fondant icing.

I lay the paper on the correct colour icing and cut around it, until I had the shapes I had cut from paper, in fondant. 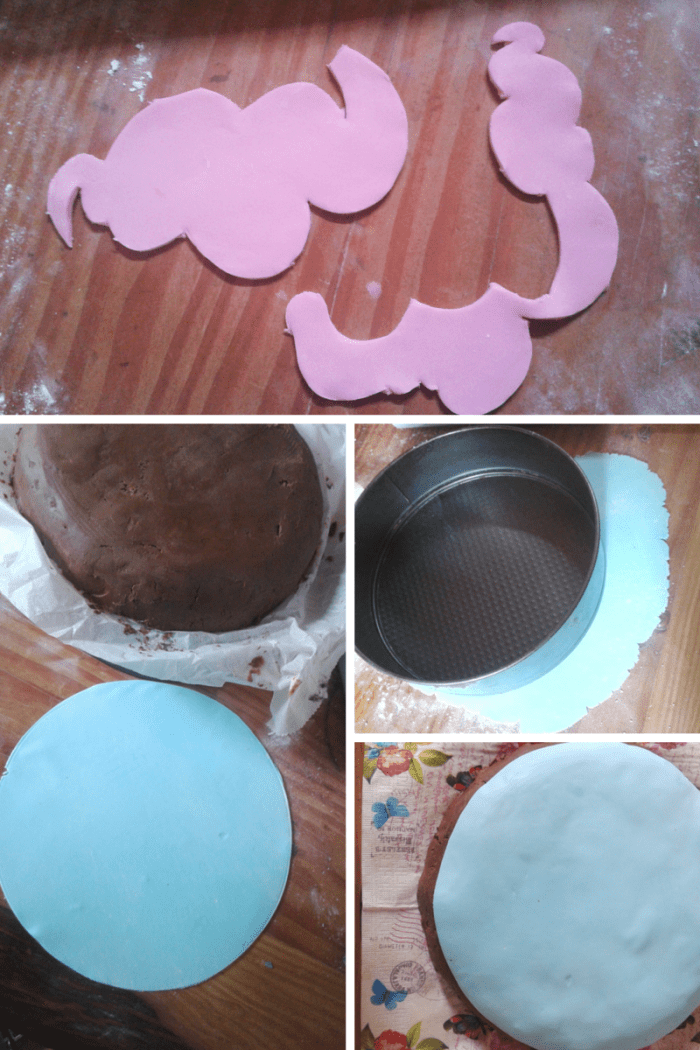 I decided on a blue background, so rolled this fondant out, used the base of the time as a guide for the size, and cut it out.

The cake had been iced in chocolate ganache so I carefully centered and lay the blue icing on top. Then, I started with the main body of Pinkie Pie. For the eyes, I cut out the shapes in white, added a blue iris and then with a little black icing colour, painted the iris. With a tiny dot of white fondant, flattened, I added the “sparkle”! 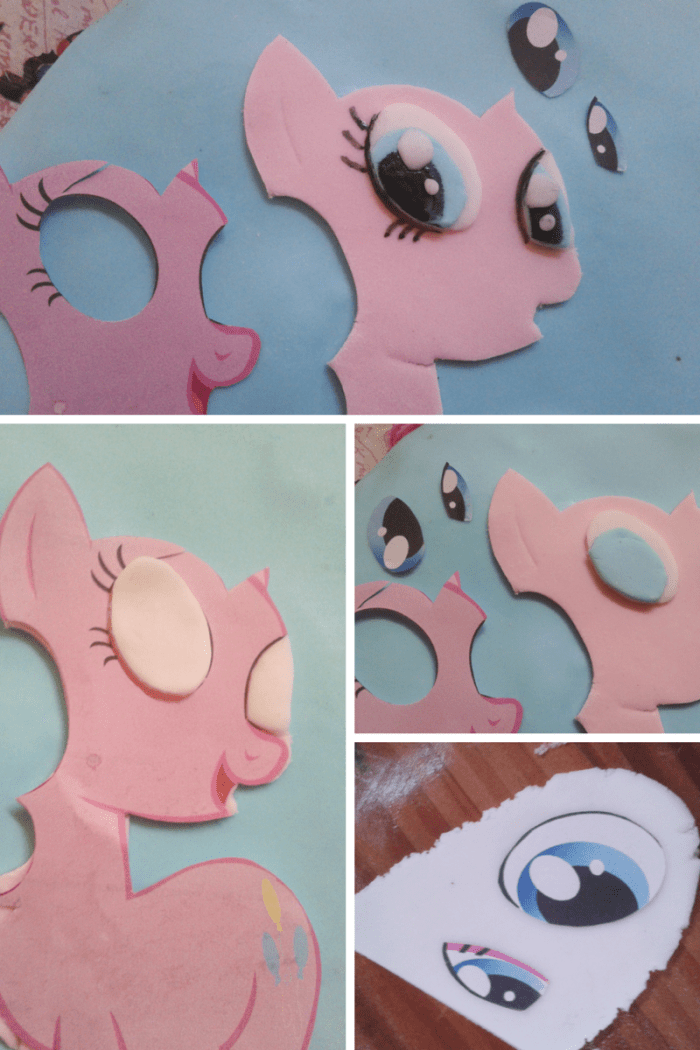 With a fine brush, I painted the eyelashes too. I then attached the rest of the parts, jigsaw-like, to make up Pinkie Pie: mane, tail, little balloons on her bottom! 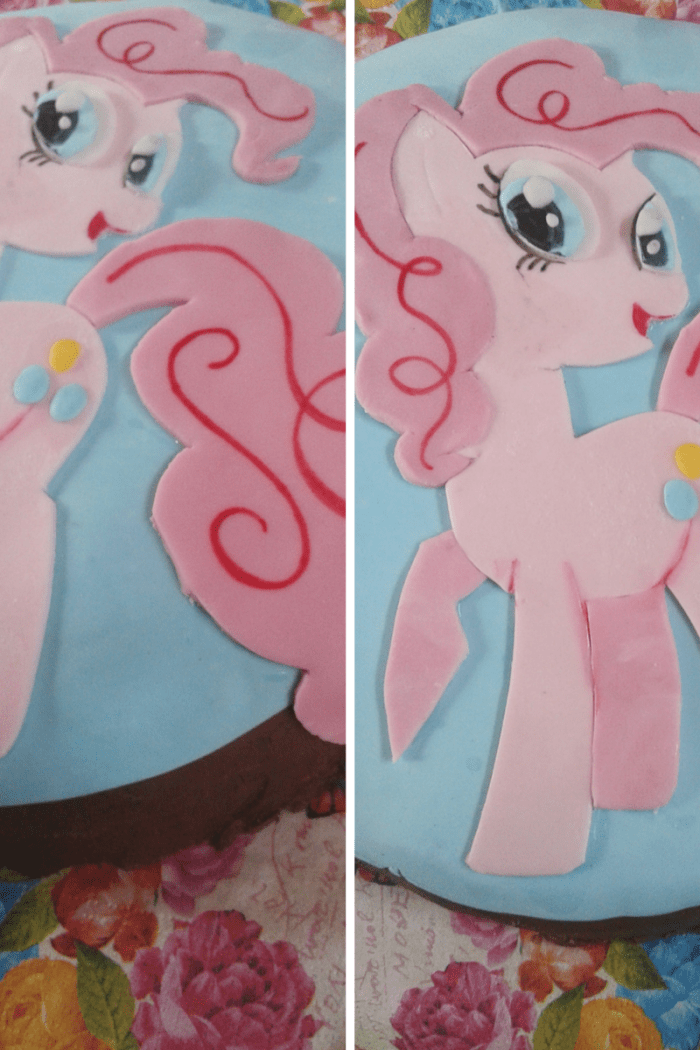 With a little deep red icing paste mixed with water, and using the fine brush, I paint flourishes on her tail and mane, then a little mouth like in the picture. 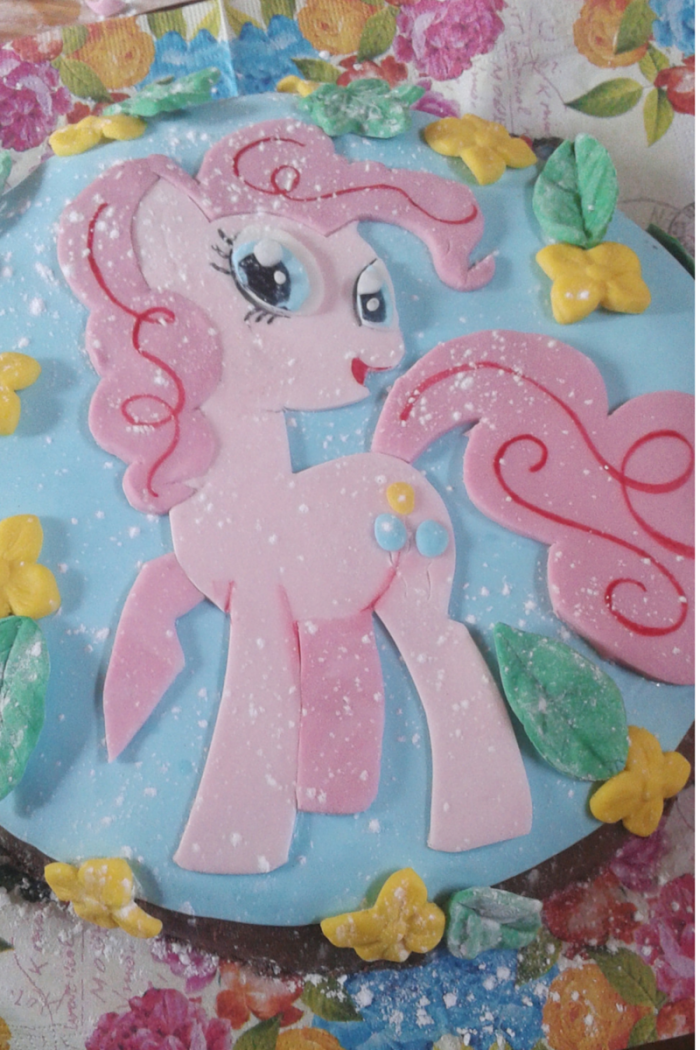 Grace had made flowers and leaves and we decorated the cake with them, then a little sprinkle of icing sugar, and ta-dah! A gorgeous, easy to make Pinkie Pie cake!