My wonderful, sweet neighbour, Julia, passed away recently; she was in her 90’s, and until shortly before she died, had lived in her own home, independent to the last. I didn’t get to spend as much time as I would have liked with her in the past couple of years, for which I feel guilty; yet, at the same time, with small children (or children at all) there is only so far you can stretch. And yet, I still feel guilty, and even more so because I miss her very much. I have such a deep sadness when I think of her or drive past her house. Guilt mixed with joy that we did know her, and that she was so part of our lives (Liam and Michael came in a few days ago, and were telling me that the nettles were coming up: every year I made nettle soup in spring and we brought it up to Julia- it’s a great blood tonic- so it became a little tradition when the bright green nettles started their garden take-over. I reminded them that Julia had passed away, and it was awful, the remembering that it really did happen coupled with the shock of remembering. Life sometimes can be very unflinching at times) (We were in the garden, talking about Julia, when Grace handed me this white feather)

Alongside the nettles shooting up, we have had a few falls of snow. When this happens, I try to have the wit to collect some. I let it melt down to water, then keep it in a labelled bottle: snow water. This was one of Julia’s folk-cures (she had encyclopedic folk-cure knowledge). Funnily enough, the  very day after I collected the snow, I burnt myself badly on the hand. It was incredibly sore and starting to blister. I took homeopathic Cantharis (hugely helped the pain as always) but resigned myself to having a gukky blister burn for a few days. 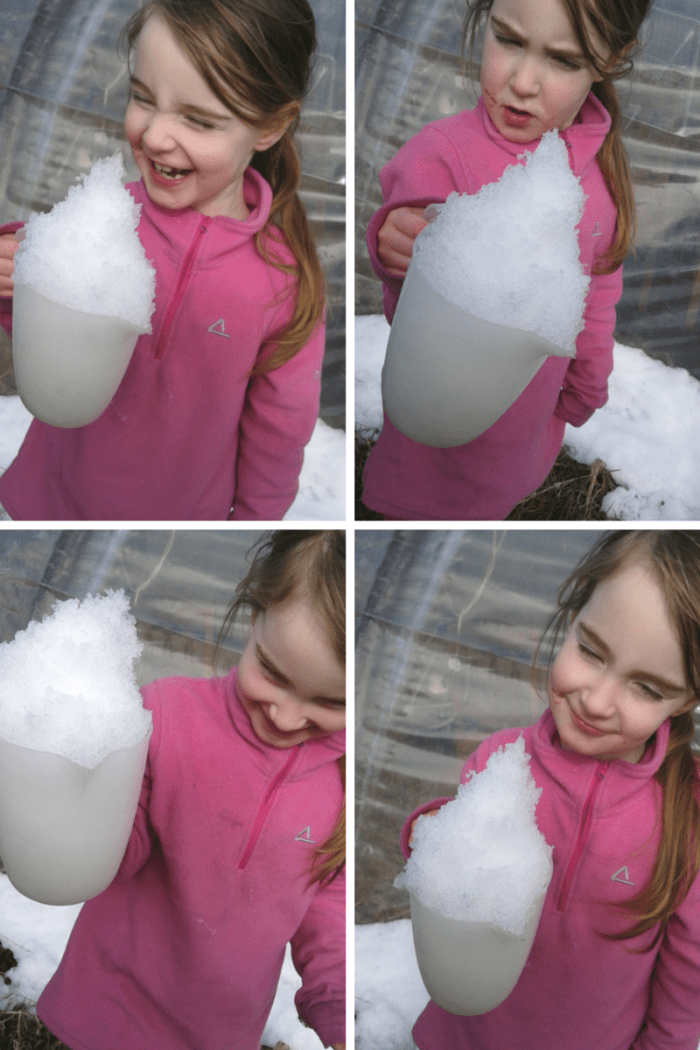 (I’m just hoping that is only Nutella smeared across Grace’s face. I seriously hope so. As for her jumper… I will really have to try preempt any future photo opportunity and ensure my children aren’t so completely manky-feral)

Michael asked me why I hadn’t used the snow water we had collected the day before. I may have blamed the burned hand for not using my head and remembering…! I poured some on and held a cold wet cloth of snow water to my hand. After an hour or so, I took notice of the burn. It was still slightly stingy, and part-raised where it had started to blister an hour before. The following day, I had a mere mark where the burn had been, and nothing else. It had faded almost completely.

And there you have it! Julia’s cure for burns: I urge you to try it. Collect some snow the next time it falls (I may have missed the boat on this, it being March. Although, this IS Ireland, and anything is possible) Worth a try 🙂

The frost hadn’t cleared.
It still lay in flurries,
like snow in the shadows,
Mottled where the rising sun
was beginning to patter with warmth.

It lay, mounded,
either side of the polytunnel
where it had gracelessly slid;
Painted the north side of branches white,
Speckled gate posts with it’s graduated hue.

The wreath for Julia’s grave
Lay waiting on the picnic bench
The cockerel fluttered into standing beside it;
Gleaming red in the morning sun,
large claws sinking into the frosted wood,
Chest swelling
As he drew his head back to crow.