Another Guest Post today, this time, thanks to Helen from The Busy Mamas. I met Helen through the Irish Parenting Bloggers group, and have enjoyed a wonderful virtual friendship which has been soaked in much laughing, crafting and plans to run away together for a gin-filled, crocheting, laughfest of a weekend 🙂

I immensely look forward to Helen’s posts; naturally funny, and full of all the good things that I love: great food, inspiring crafts and tales of parenting some very oddly-named children… 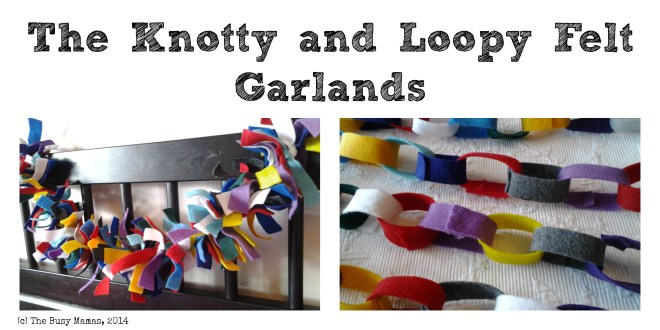 {This post was previously published on Helen’s blog, but she kindly gave me permission to reproduce it here!} :

A few years back I bought a massive load of felt on Ebay for about 10c per A4 sized sheet.  This felt is made from recycled plastics so there’s a feel good factor to using it – but then again it’s a little too coarse to use on anything you’d wear but is perfect for decorations.  These two lovely garlands took just a few hours to make (happily plonked in front of the telly too) and just need a length of twine, felt, and a glue gun handy. They’re very pretty and will last year after year, even after the kids man-handle them.

Both garlands need fabric strips of the same length. To make these I chopped up strips of felt that were roughly 2.5cm wide and 10cm long. I say roughly as happily this isn’t an exercise in accuracy.  I used up about fifteen or twenty A4 sheets for three garlands: the ‘Knotty’ Garland that’s about 1m long and two Loopy Garlands that are about 4m long each.

For the ‘Knotty’ Garland’, I took a length of twine about 1.5m long.  I folded each felt strip in half and cut a small notch at the mid-point so the strip looks like a little tie.  Then I just put it around the twine and tied a half knot.  (I tried a few different ways including losing the notch and using a dot of glue but that didn’t give me the nice bunched look I was after).

As I went I just scrunched them together and it was done!

The ‘Loopy’ Garland’ is like the ones we used to make from newspaper in National School … a few years ago now! It was as easy as taking a strip, wrapping it around my fingers and putting a dab of glue with a glue gun and quickly folding it over.  After the first one, you link each loop through the last and keep on going. Hey presto! 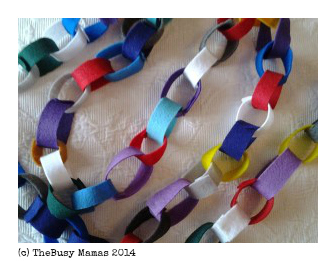 These a perfect to make with the kiddies – or like me with your inner child when the other monkeys have gone to bed. I reckon you could do both using different materials – like yarn for the Knotty one and fabric for the Loopy one so use up whatever you have handy.

Thank you Helen! I was thinking of all the bags of fabric scraps I have… knotting would be great practice in dexterity for small children.

This tutorial was originally posted on www.thebusymamas.ie in December 2013.