Last week, I received a hamper from Avonmore (it was part of a blog thingy {insert a long story explaining why}…) and so I received this! 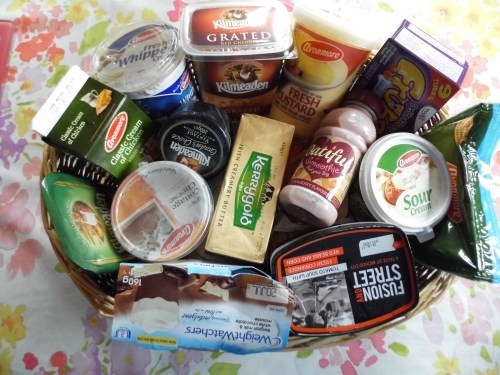 Very thrilled, I can tell you! Apart from the butter, cheese and some yogurts, I wouldn’t really buy any other  products: soups (I make my own), smoothies, custard, whipped cream (ditto)…But I must say, I could almost be swayed now 🙂 One of the products was a pot of custard flavoured with vanilla;  whilst I love hot custard with apple tart, a suggestion from Caitriona at Wholesome Ireland gave me a new idea: custard tarts! I was making pastry for a quiche Lorraine (using the cheese, sour cream and butter from the hamper, and the glut of eggs thanks to our hens), so I decided to make little tarts in our cupcake tins. 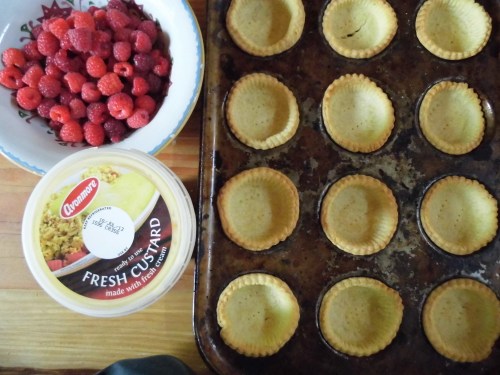 I cut out circles of pastry, and lined each mould with a cupcake paper, filled with baking beans, and “baked blind” for about ten minutes. When they were cool, I spooned in some of the custard, Grace pushed three raspberries from the polytunnel into the middle of each one and baked them for about 15 minutes. When they were cooked and cooled, we enjoyed (swooned in delight more like) these little tarts with a spoon of the whipped cream on the side. 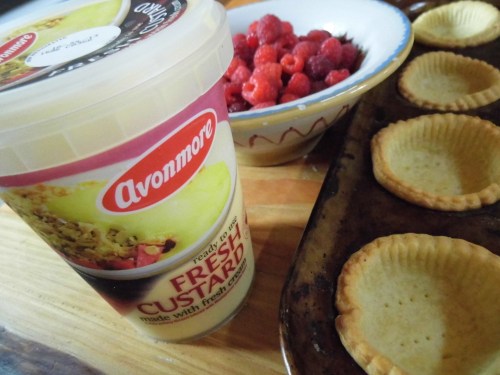 The custard was silky and sweet with a lovely vanilla-y taste, and extra delicious with the raspberries. I’m not the greatest custard maker (my dads forté: it is, apparently, an art and a science, but I’m a bit more slapdash and mine never turns out as nice) so I think I will definitely buy this again to make more of these tart. 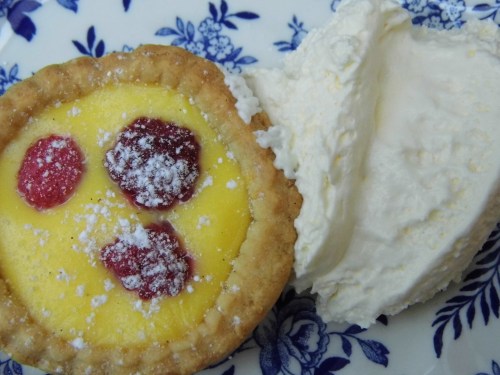 I am still working through the hamper: I had delicious “Fusion and Street” Tomato and fresh coriander soup (delicious: tasted actually very like homemade soup- not, as we like to call it in our house: “chemical soup”) The yogurts were practically demolished as I was taking the cello-wrap off, so a big thumbs up for them. The grated cheese (my kids fell around the place laughing that you could buy cheese grated) I used in the quiches, and I’ll start on the “good” cheese later (yum yum) 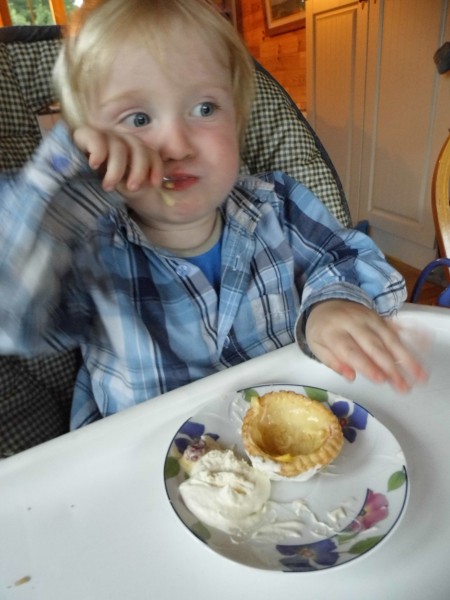 (James scooped out the custard and raspberries: wasnt as impressed, or should I say, impressed at all, with the pastry case!)

This hamper was a real surprise, and far more generous than I would have ever imagined. I’m trying things that I possibly would have never known existed, and so far, everything is just deeeeeelicious! Thank you Avonmore!

This was not a sponsored post, all opinions are my own!