May, 13, 2013Posted in Celebrations, Cooking, Home-making, Our Home, Recipes, tea

Over the past two weeks, this wee little blog has has some lovely kindness directed towards it. Firstly, we (for this blog relies on my whole family to exist) “won” a Basement Blog Award for “My alter-life blog (the life I wish I had)” from Laura at MyInternalLife blog. Of course, I did think this was hilarious, as, when I realized we had won it, the house was in its usual state of being completely bonkers: I often look around, five minutes after tidying and cleaning and it has returned to its default position (looking like someone has ransacked it); but that Laura even awarded me such a sentiment tickled me pink no end 🙂 Thank you! (And do check out her lovely, lovely blog. Beautiful, soulful writing)

The second wonderful thing was that I received a gorgeous review for one of my prints that I have in my Etsy shop, from April, who writes at MamaCourage. Another blog with beautiful writing, do pop over, have a read and say hello! 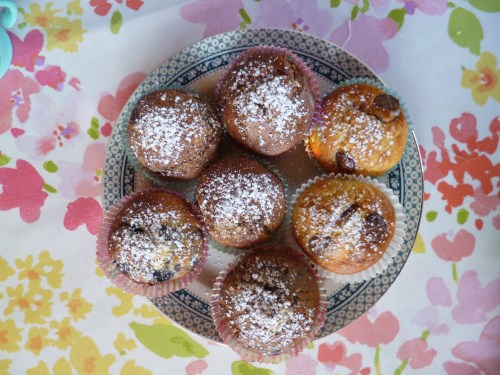 And so in celebration of kindness I decided to make some muffins. I had had some blueberry muffins over at my friend Bobbies house a while ago, made them once since, and decided to make them again today (not too sweet, and light and airy) I made double the recipe below, divided it in two and made chocolate chip and blueberry. 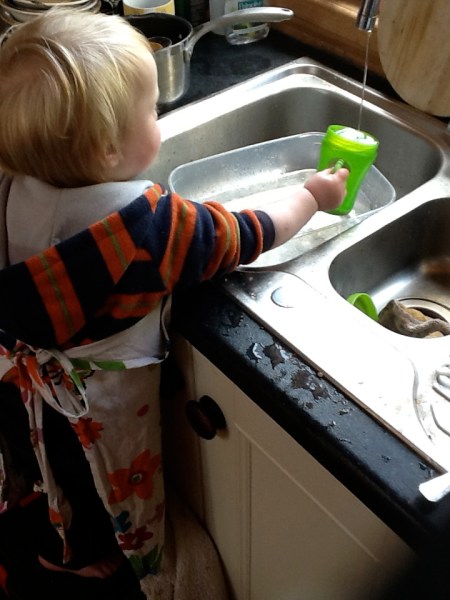 My youngest son, who can play for hours in a basin of water had migrated from the floor (after a thorough flooding) to the sink so I knew I had some time. Except he came in at the end to “help” and anyone who has experience of baking with a 21 month old will know that it invariably leads to disaster. TOTAL disaster. 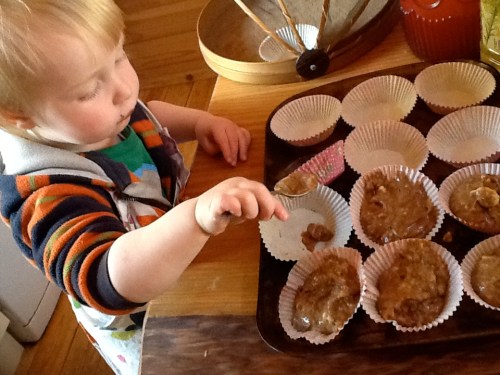 He has gone down for his nap with more mixture in his hair than in any muffin case. That was after I dug off the dried in mixture from his forehead and his ear. 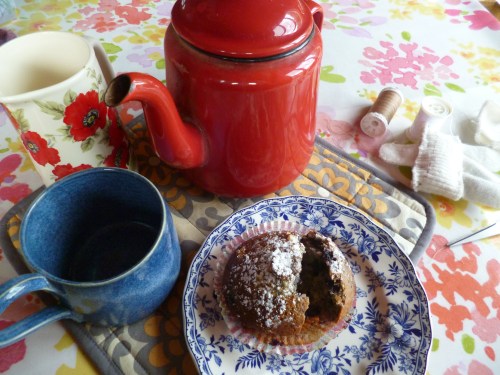 Yes. Sigh. So I now type this blogpost after my nerves have been reconstituted by the afore-mentioned blueberry muffin (two actually!) and a delicious pot of tea. Whew.

(can I just say here: I’m not sure whether someone’s “muffins” is a colloquialism for something else, so if it is, I apologise. My fifteen year old son gave me a disapproving look when I declared that I loved Bobbies muffins, and muttered “that just sounds all wrong” and won’t expand. The teenage grunt to say “you wouldn’t get it” is all I am getting. But just to clarify, these are for edible muffins. 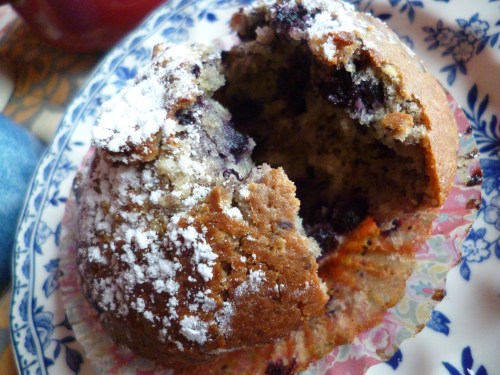 In one bowl, mix 300g plain flour, 3 teaspoons of baking powder and 125g of caster sugar.

Stir the second bowl into the first, add in the melted butter then stir in 200g of fruit (the original recipe called for raspberries and blueberries, but I just used blueberries)

(I divided the original recipe and in the second batch, added some chocolate chips and 1 tablespoon of cocoa powder)

Bake in a hot oven 200’C for 15 minutes until well risen and golden.