Jun, 4, 2011Posted in Animal Husbandry, Our Garden, Our Home

Whilst I wandering down to the bees the other day, I thought they were a bit… agitated, I can’t quite explain it, but I knew something was up. The following day, when I was out in the garden I noticed a lot of buzzing. We have kept some bee hive stuff and frames in the polytunnel, and when I went in, there were a lot of bees buzzing around the hive. I just knew they had swarmed, so continued through the polytunnel and halfway between it and the actual hive I saw the swarm hanging off a branch in the hedge. I have never seen this before, and is was quite amazing- the noise!! 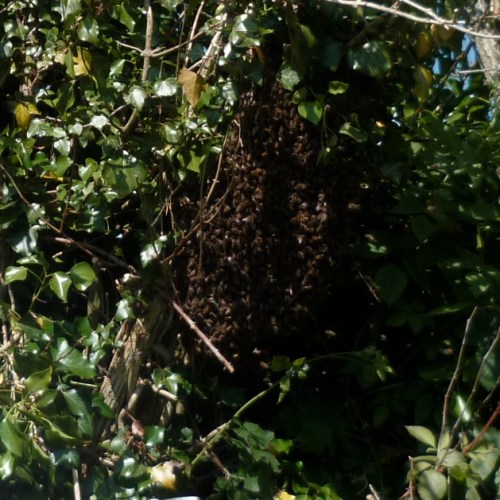 So I phoned up someone we knew

(he had started us off with bees, a fascinating individual. As nutty as we are)

who came within an hour, we readied a hive and we got what we needed: (a long arm hedge cutters- like a giant sissors; and a duvet cover to catch the bees in) suited up, and headed down the garden to the swarm (they can disappear quickly) It was at that point that the swarm fell sideways and landed on my head. Yes, my head, all 80,000 of them. It all happened so quickly: they slid into the duvet cover, and our Bee-Man brought branch and duvet down the field, where he shook the bees into the new hive. (At this point, let me tell you, apparently swarms don’t sting-I found that out after the event. You can, supposedly, even stroke them. But I won’t be chancing that, despite not getting one sting even though I was surrounded by them!) We weren’t sure whether they would stay- it all depends on whether you manage to get the queen inside the hive or not… but last night, it all looked good, and this evening they were still there- yay!! So now we have two hives, and we are watching carefully this new hive. This was, apart from being very exciting, extremely good fortune.

no, not from the adventure of catching the swarm, but from almost being cooked in the bee suit… not the kind of activity one needs to partake in on the hottest day of the year so far!!