A few days a go I burned myself on the arm. We have a bottle of snow water- (snow collected in a bottle, left to melt and you pour it on burns. A great cure)-Anyway, I couldn’t find it/ got distracted and thought not much more of it, until the blister that had formed, burst and it really began to sting.

I had some homeopathic burn ointment which I applied, it soothed it and I put a plaster over it to protect it.

Did I mention that was a few days ago? Try as I might, I could not get the plaster off. It was welded to my arm. Now, I don’t have hairy arms (pride myself on near-alopecia where body hair is concerned) but I darn well GLUED the plaster over a few fine (painful) hairs, and it continued to refuse to move.

It got covered in paint, glue, various foodstuffs (it hasn’t helped that I’ve been reading Roald Dahls “The Twits” to the children and it is very close to the bone)

So this evening, after dinner I decided that it needed to come off. I was slowly prising it off, considering the possibility of paying to go under general anaesthetic to remove it, and while feeling decidedly faint, asked Fergal to “just yank it off” (in fairness to him he didn’t want to and didn’t relish the eventual pull-off) and had a Very Near Fainting Experience (necessitated me putting my head between my knees Yes, that bad)

I limped to the sofa, helped by my dear sons and daughter who all gave me kisses, lots of sympathy, a rice krispie bun

(my daughter, who obviously wasn’t quite as sympathetic as the boys, robbed me of the jelly diamond on top… the cruel wench) 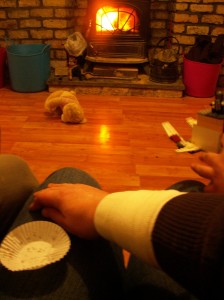 (yes, my hand looks decidedly wierd… hmmm. And note eldest son trying to distract me from fainting with talk of lego)

and when I was lying prostrate, moaning on the couch in Near Faint Delirium: a pot of tea. Beloved Husband bandaged my arm which elicited even more sympathy (always good) and I was given some beautiful cards made by my artistic sons, a cuddle from Pebbles topped it all. 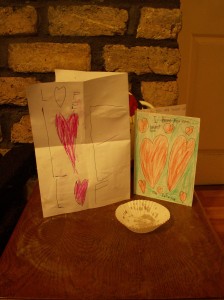 I’m considering making up some ailment tomorrow The bee-sting I received last week seems to be flaring up all of a sudden, so I reckon tomorrow could be even worse than today.

It’s hard when you are of delicate disposition.