So far, just lovely things have happened this week (and it is only Tuesday! It bodes well for the rest of the week!!) 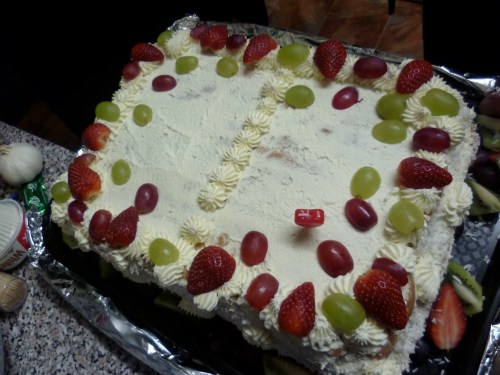 One of my (five) brothers had a 21st birthday over the weekend, and we had a most lovely party for him… let me just say that the food was as wonderful as the company, so it was a truly a great night! The snowdrops have appeared in my parents house! Spring is here or well on its way, and so are the brisk, bright days, marked by children playing outside for hours… I love this time of year.

That same brother has come to stay with us, and I cannot tell you how much we enjoy having him here- it will be so hard to let him go!!!!!!

Yesterday, I received in the post, a beautiful, inspiring book, from a cousin-in-law who had received a second one, thought of me, knew I would love it and sent it to me! That just gladdens my heart no end, I feel really blessed that that energy and kindness of spirit has come my way… ♥ ♥ One of my oldest friends came over today-

(don’t worry Mother, I didn’t delight her with month-old Brie) –

and my dear friend made these Red Velvet Cupcakes – and, oh yes, thay were even more fantastical to eat than I could ever possibly photograph. When I have recovered sufficiently from delight-overload I will write down the exact recipe (rather than make it up as I go along) and share it with you here. A show-stopper of a cupcake if ever there was one!!